If you have been following Marta’s story, you may recall that we discovered she had three micro chips. Even though none of them were registered correctly, I was able to trace them back thru the chip companies who in turn told me whom the respective chips were sold to.

The oldest chip went back to a woman in Kansas who said she and her husband had three Keeshonds that she sold about seven years ago.

“They were Jim’s pride and joy,” she said. But when her husband developed sudden severe Alzheimers, she was unable to care for him and the dogs. She cried when I told her of Marta’s condition,

“Jim would be heartbroken,” she said. “I’m glad he isn’t here to know what happened to his baby.”

No, I didn’t ask much more. I only learned the dogs were young, and she thought Marta was about 18 months. The woman was crying so hard it was difficult to understand her. She said all three went to the same woman, but after so many years she no longer had the records.

The second chip wasn’t registered properly either, but through the distributor–a company that caters to 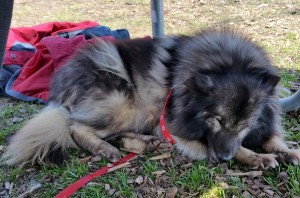 commercial breeders–I learned this chip was sold as part of a “lot” about seven years ago.

So Marta went from a home to a breeder. Likely she stayed there until a couple years ago, when she was sold of traded to the woman who released her to me.

So the mystery of three chips is solved, sort of. Given the level of stress the original owner was under, I guess she did what she had to do. Rescue groups were not so easily found even seven or eight years ago, and I doubt the owner even knew they existed.