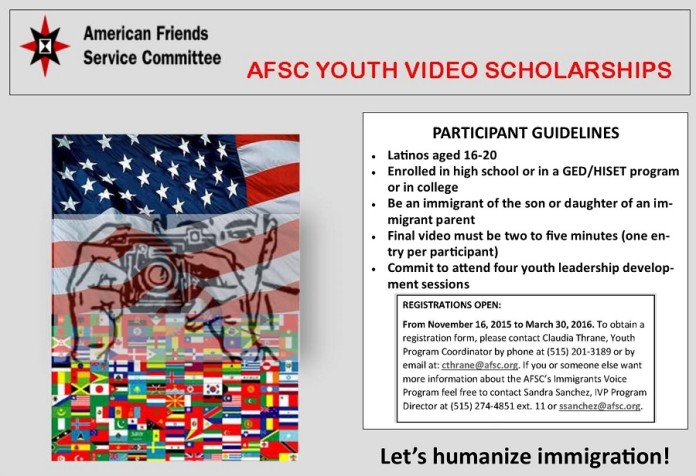 Immigrants and immigration have been painted in dark colors lately by some U.S. politicians. In order to restore some balance to people’s imaginations, the American Friends Service Committee (AFSC) Youth Video Scholarship program is encouraging young immigrants to tell their stories in videos and maybe land some money for college in the process.

In Perry, the best chance might be for young people with Deferred Action for Childhood Arrivals (DACA) status. Karen Ventura, until recently the director of New Opportunities Dallas County Family Development Center in Perry — best known by the shorthand name of the Perry Food Pantry, New Opportunities’ most visible program — is making a special appeal to Perry-area DACA youth to participate in the video contest.

“I know we have a lot of DACA recipients in Perry,” said Ventura, now international sales coordinator for Musco Lighting in Oskaloosa. “I just don’t know who they are. My role is to help the American Friends Service Committee to find youth in the Perry area who want to participate in this contest.”

Ventura said she talked to guidance counselors at Perry High School about the program, and they sounded positive. Privacy rules prohibited them from divulging the identities of DACA students, but Ventura said they would make these students aware of the video scholarship program.

DACA was started by the Obama administration in 2012. The program allows undocumented immigrants who entered the U.S. before their 16th birthday and before June 2007 to receive a renewable two-year work permit and exemption from deportation. It was expanded in 2014 to include undocumented immigrants who came before 2010, also eliminating the requirement that applicants be younger than 31 and lengthening the renewable deferral period to two years.

DACA eligibility has now been extended to nearly 1 million young people in spite of fierce opposition by some state governors and U.S. lawmakers, such as Iowa’s fourth-district Republican Congressman Steve King.

Ventura is Perry’s point person for the AFSC video contest. The project forms part of the public-service component of her membership in the Latina Leadership Initiative of Greater Des Moines.

“My focus is DACA kids,” Ventura said, “but it can also be children of immigrants as well. But I’m looking mainly for DACA students because they don’t have as many opportunities for scholarships. Most scholarships out there and FAFSA (Free Application for Federal Student Aid) are for U.S. residents and U.S. citizens only. DACA kids are simply not allowed to apply for those sort of things.”

The AFSC video scholarship contest is open to all Latinos between the ages of 16 and 26. Participants must have DACA status and be enrolled in high school, in a GED/HISET program or in college. The final video must be between two and five minutes in length, and only one entry per person is allowed. Participants must also be willing to attend four leadership-development sessions. The deadline to register in March 30.

While many readers of ThePerryNews.com know Ventura from her work at New Opportinities, fewer have heard her speak of her own experience immigrating to the U.S. from Guatemala as a child. She said part of the motivation for promoting the video scholarship program is her desire to share with Perry youth the positive effects she has found in telling her own story.

“I’ve found through my life that sharing my story has been very powerful,” she said. “It’s helped me a lot and brought me a lot of support from people, and I say that because I’m a DACA recipient as well.”

Ventura’s mother fled Guatemala in the 1980s during that country’s 36-year civil war. Her husband was murdered by a government death squad, and she was in great fear for her own life and the lives of her children. She sought political asylum in the U.S., leaving her 3-year-old daughter Karen and 3-month-old son with her family in Guatemala.

Karen eventually joined her mother in the U.S. when she was 9, and she grew up in Perry and Oskaloosa.

“Later on, I found I didn’t have a status because technically I wasn’t supposed to stay with a tourist visa,” she said. “It was really hard because I was a good student, and I wanted to go to college, but I couldn’t. I didn’t have a Social Security number, and without that you can’t apply for scholarships. You can’t apply for anything. Yet I was here. I grew up in America. I felt like I belonged here, but then I didn’t. At the same time I didn’t feel like I belonged in Guatemala either. I didn’t know anything. I was really little when I came here. So it was really hard.”

Paying for college is a bigger challenge than ever in the U.S., but for DACA students the challenge is greater yet.

“Being a DACA recipient myself,” Ventura said, “I really know about the struggles and how hard it is to go to school financially because there’s not as many scholarships out there for DACA recipients. So the AFSC has this video contest so you can share your story, which is one of the most important things, to be able to share your story and possibly also to win a scholarship.”

She said she wants to reach out to Perry youth because she knows at first hand the guilt and shame that some U.S. citizens heap on undocumented immigrants.

“It can be hard for young people to open up,” Ventura said. “They’re like, ‘No. I don’t want you to know my story. I don’t want people to know where I come from.’ That’s what’s going to be the challenge. But I tell them it’s a good thing to share your story. There are a lot of people that are good, and they care, and they want to help you, but you need to come out. And that’s what happened to me. Honestly, when I started sharing my story, doors opened up. People helped me a lot. That would have never happened if I didn’t share my story.”

Fitting in socially is crucial to people, particularly teenagers, and exclusion can be deeply painful.

“It’s very sad,” she said. “Growing up, you know, you don’t choose to be in this situation. I have friends who were brought here much younger than I was, even month-old babies, and they grow up loving America, feeling like this is their country and learning about the history. Then you’re faced with this reality that you don’t belong here, that this is not your country, that you’re not legal here. People don’t realize the reality of things. A lot of people base their opinions on what the media is putting out there. That’s why I’ve found sharing your story can be so powerful. When I was in Perry and got a chance, I did share my story with people who were open to hearing it.”

The AFSC Youth Video Scholarship is one way to push back against the ignorance, bigotry and racism that are now given sanction by some U.S. politicians.