Al Bell is a name well known around central Iowa. For 30 years, he and his wife Rhea traveled around Iowa and the southern part of Minnesota giving film presentations to elementary school assemblies about the trips that he took each year.

On Sunday the Bell’s second daughter, Becky Bell-Greenstreet, visited the West Central Valley Middle School in Stuart to discuss her father and show some of his films. This event was part of Redfield’s Old Settlers Reunion and was sponsored by the Redfield Historical Society.

About 70 people attended the Old Settlers event, most of whom had fond memories of visits to their schools by Al Bell.

Bell worked his way through college at radio stations and as a photographer. After college he continued working in radio. Bell-Greenstreet said her father was always getting fired from his radio jobs because he would continually bring up ideas to program directors who would then dismiss him.

In 1949 he came up with the idea of supporting his family by going on trips and making films to show to children about these trips. He went around to schools selling his idea. He told school administrators that for $10 he would put on a program and show a film that elementary children would like. If they did not like it, he would give their money back.

Bell was fluent in German and Spanish and could get by in Portuguese, his daughter said. Rhea Bell was a concert violinist in the Des Moines Symphony during the 1940s.

At the peak of his popularity, Bell was presenting programs in more than 400 Iowa schools yearly. A group of superintendents from Minnesota heard about him, and he also presented programs in the southern parts of Minnesota. One year he did 500 programs in schools, Bell-Greenstreet said.

From 1949 to 1979, Bell and his wife made 30 films while traveling to more than 60 countries. The films were also about parts of the U.S. and Canada. Each film started with a scene of a ringing bell and would be named “Sons of Italy,” “Sons of Romania” or wherever he had visited.

Bell had an agreement with his wife that they would outside the country only once every other year. In odd years, they would travel somewhere within driving range so that they could take their children along. It took up to six weeks to shoot a film over the summer and when out of the country, they had to leave their children to the care of someone at their farm in Stuart.

During the winters, Rhea Bell would line up the schools for Al Bell’s presentations during the school year.

The Bell’s would bring back several artifacts and souvenirs from each trip. They would take an empty suite case with them in order to bring the items back.

Bell would travel the state, sometimes doing four programs per day for school children. He and his wife would wear native costumes and tell the children about the artifacts and native dress that they had brought along with them. Then they would show a film.

Some films have plot lines surrounding the area where they are visiting, and some are more of a travelogue. Bell also used his wife and children in his films.

Bell had to give up his travels and presentations in 1979 because of a heart condition. The Bells retired to Arizona, where they did programs for children in Phoenix and Tuscon. Later he also did programs in his church.

In 2010, Liz Gilman from Stuart and other Al Bell fans hosted an Al Bell film festival. More than 300 people attended.

After many years of persistence by Bells’ fans, the Iowa History Museum hosted a display in 2014 of the Bells and some of their costumes and artifacts. The Bells also sold some of their artifacts at garage sales.

Bell-Greenstreet discussed her role in her father’s film about the Okefenokee Swamp, which was then screened. Before her presentation, “Sons of Holland” was also shown.

The films were preserved by her siblings but were deteriorating badly by 2010. All but the first film on Alaska were transferred to DVD. The first film was shot in 8mm while the other 29 were shot in 16mm.

Bell-Greenstreet also discussed the book she wrote about her parents and their work, entitled, “Al Bell Remembered.” She also had available a DVD set of 29 of the 30 films.

Many in attendance asked questions about Bell and the films. Others shared their memories of Bell and his presentations.

We like stories about the past. But ThePerryNews.com might not have a future unless you step up and become a $5-per-month donor. One-time donations are also welcome. 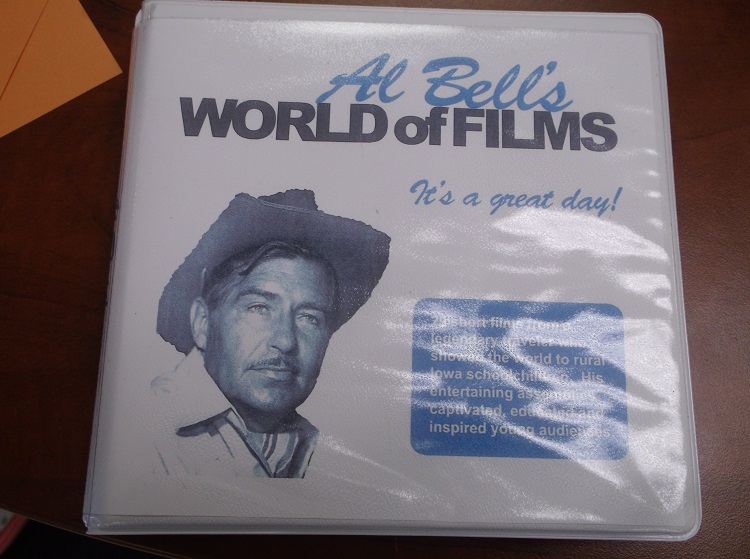