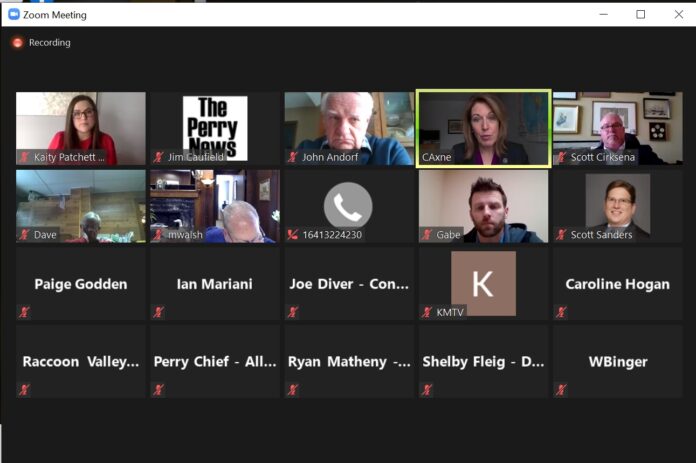 The hour-long Zoom meeting gave the second-term Congressperson an opportunity to update local officeholders on progress toward another federal aid package, which is expected to include aid for essential services and help with revenue shortfalls for cities, counties and states.

“I know that a lot of pressure has come down to our local government to make sure that we’re addressing the needs of our constituents,” Axne said. “Although we’re pushing money at the federal the level, the bulk of the work ends up in your offices, and I couldn’t be more grateful for all that you’re doing to make sure that on the ground we’re taking care of Iowans and helping our families do as much as they can and be as successful as they can during this difficult time.”

Axne said the Biden administration’s proposed $1.9 trillion pandemic relief package is moving through its final House markup, and a vote on the bill is expected next week. She said $350 billion is set aside for state and local government relief, with about $200 billion for states and $150 billion for cities and counties.

“Iowa’s smaller cities and towns will be sharing a total of $571 million while Des Moines gets $86 million directly,” she said.

Andorf thanked Axne for hosting the roundtable, and he welcomed the other mayors, with whom he shared many COVID-related concerns in common.

“As mayor of Perry, Iowa, the number one concern I hear about personally is the availability of the vaccine and also the process and problems we’re all having in getting ourselves an appointment to get the vaccine,” Andorf said. He said a local Perry pharmacist told him the supply is short, and he has a waiting list of 2,200 people.

“I’m hearing a lot of frustration about that,” Andorf said, “so anything we can do with the vaccine to make it available and then all of us getting a shot in the arm, so to speak.”

Andorf also mentioned the need for funding for mental health services and for help with unemployment insurance, particularly for low-income people. Among the many infrastructure needs mentioned by the mayors, Andorf emphasized Perry’s need for high-speed internet access for all.

“We’ve had snow days and cold days in Perry,” he said, “and instead of moving everybody online, we canceled school because we still have too many people in our school district who don’t have very much internet availability, so that’s still a problem for us.”

Axne replied with promised funding for all the needs noted by Andorf and said some funding for broadband access is in the pandemic relief bill, but much more should be expected in the large infrastructure bill anticipated later this year.

“We recognize those factors, and we hope that all this gets passed through in a bill,” Axne said. She also noted the urgency of passing a relief bill in the face of several looming March deadlines, such as the expiration of unemployment benefits and many moratoriums on evictions.

She said two bills that she sponsored as a member of the House Financial Services Committee were passed, including a housing-assistance bill that will provide counseling for people seeking to renegotiate the terms of their rental agreements or mortgages.

“We found that when you provide those kinds of counseling services, it’s three times greater the number of people who actually keep their homes,” she said, “and this not only helps to keep a roof over people’s heads but makes sure they continue growing equity and benefit our communities with home ownership as well.”

Clive Mayor Scott Cirksena, the only other Dallas County mayor at the roundtable, also mentioned broadband as a “huge” concern. “It’s not just a rural issue,” he said. “It’s an urban issue as well.”

Cirksena again raised the importance of funding for mental health services, saying the COVID-19 pandemic was “causing a mental health crisis that we’re just now starting to see, especially with our children.”