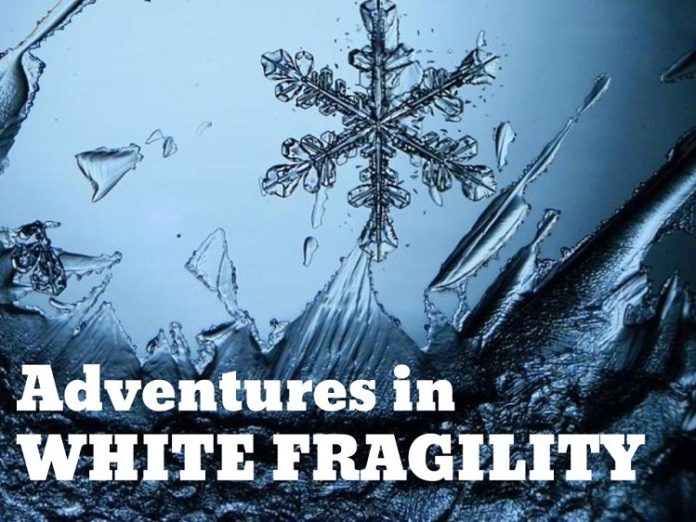 Am I racist? There are people in the news whom I wouldn’t hesitate to toss in that category. I haven’t done what they’ve done, and I don’t have a white robe and pointy hood in my closet, so I’m good, right? No racism here. Others might need to be schooled about racism in American, but not me. I’m woke.

If we view racism as “individual acts of intentional meanness,” then it’s easy, if we’re called out, to excuse ourselves by saying we had no intent, therefore, no racist behavior here, according to Dr. Robin DiAngelo, who spoke about systemic racism and white fragility Tuesday at Iowa State University.

But racism is not an event, according to DiAngelo, author of “White Fragility: Why It’s So Hard for White People to Talk about Racism.” She said racism is a “system that’s backed by legal authority and institutional control and embedded in our cultural definition of what’s normal, valued and told.”

It’s not a distinction between being racist or non-racist but rather a continuum of racism.

DiAngelo said that when we approach racism by understanding its systemic nature, then we — and she was speaking to white people — can begin to ask what our involvement has been and how we might change it. None of us is exempt from the forces of systemic racism. The question is how it has influenced our lives. What does it mean to be white in America?

Where have you — white people — ever been that you haven’t felt you belonged? Do you think that people of color have that same virtually 24/7 feeling of belonging that whites in America have?

What can we do to move toward a world where everyone feels they belong 24/7? Seek out and understand the experiences of people of color. Learn when we’ve offended or been insensitive.

I know I’ve been hesitant to ask whether I’ve done something offensive or where I could do more. I don’t want to appear ignorant, to offend, to be embarrassed, to prove that I really am not “woke” or to ask the question everyone laughs at. Who wants to be uncomfortable or learn they aren’t as non-racist as they thought?

But the truth is I’m not fooling any person of color. I’m sure there would be laughter — maybe politely internalized — if I proclaimed to people of color that I’m “woke.” I’d be less ignorant to admit I need guidance and education, to build relationships, seek feedback and act upon what I learn — for the rest of my life. To keep trying even when I make mistakes — which I will.

But we make it difficult for people of color to bring up issues — it’s what DiAngelo calls our “white fragility.”

If racism comes up, it “triggers a range of defensive moves,” she said. We’re immediately building a mountain of evidence to prove how racist we aren’t instead of listening, learning, building relationships and ultimately making changes.

We tend to make the person of color into the problem for raising the issue. Our trigger defensiveness, our “white fragility,” stops the valuable conversation that could have been. You’re offended? No. I’m claiming the bigger offense here — how dare you suggest I offended you?

We all have opinions about racism in America but opinions that are oftentimes not informed. Just because we don’t understand racism doesn’t mean it doesn’t exist — racism doesn’t need our validation. We are the least able to determine how racist we are, according to DiAngelo.

How does proximity make you non-racist? Racists aren’t allowed to live in cities? DiAngelo used the example of sexism. When male-female couples get married, is sexism magically erased because of proximity? And is being nice to another human being honestly your strongest case for not being racist?

We’ll say, “I was taught to treat everyone the same,” or “I don’t see color.” Reflect upon that honestly. In your education, in your home, were you actually taught to treat everyone the same? Or were you taught to be more cautious around people from this group, to lock your door if you see someone from that group, to call the police if a member of another group is loitering in your neighborhood?

When we walk into a business, a job interview, an organization — do we, as whites, truly not want to be seen as white? If we don’t want our whiteness erased from our identities and our life experiences, then why do we think it is helpful to tell someone we don’t see them as a person of color and the unique experiences that brings?

This is a lifelong commitment to educating ourselves and understanding the system in which we live. Stop citing “evidence” and listen with humility, suggests DiAngelo.