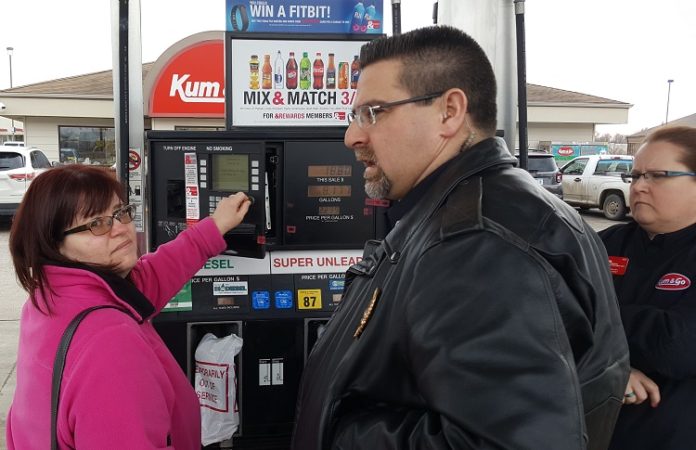 Another two credit card skimmers were detected about midday Saturday on gas pumps 3 and 5 at the Kum & Go store at 1115 141st St. in Perry, often called Kum & Go South.

“It is believed that these two skimming devices were only on the pumps for less than 24 hours,” Archer said.

The police department recommends that customers who pumped gas from either of the two pumps — pump 3 and pump 5 — within the last 24 hours should check their banking or credit card accounts for any suspicious activity. Immediately report any suspicious activity to your bank or credit card company, and then report the incident to local law enforcement.

“The Kum & Go staff have been conducting daily checks of the pumps,” Archer said, “so we are fairly certain that the skimmers were on the pumps for less than 24 hours.”

The store and its customers were strung by two credit card skimmers in mid-December, leading to numerous reports of credit card fraud.

“Since the last incident, they’ve been doing daily checks,” Archer said, “and for the last three weeks they’ve been actually opening up the machines, so we’re pretty confident that it was between those times that they gave us. Yesterday they physically opened up the machine, and today they opened them up and found them.”

Archer said the latest skimmers “look to be exactly the same or very similar to the last devices we had. It’s definitely some kind of professional thing where they’re going around and putting these on a lot of them.”

He said recent arrests in the Waverly area show the skimmers are part of a large and well organized criminal enterprise.

“These are big rings that are doing this,” Archer said. “The last people we caught doing this, we were able to identify three suspects, we just don’t know who they are. We don’t believe they’re from the area.”

Visit the GO Banking Rates website for safety tips in protecting yourself from skimming devices.