Dallas County is rich in baseball history. Every town in the county at one time or another had a town baseball team. It was truly the pastime of the county for many years.

Many people and teams compose the history of baseball in Dallas County, but I will start by looking at the great Babe Ruth’s visit to Perry in 1922.

The great George Herman Ruth, also known as the Babe, was a hero to every red-blooded American boy. He was the “Sultan of Swat,” the Bambino and the home run king. He had in 1921 broken the all time major league home run record.

He was known to everyone.

So when it was announced that he was to appear in Perry at the conclusion of the regular season with teammate Bob Meusel, there was much excitement in the town.

Bob Meusel was a star in his own right. He put up numbers that rank him among the leaders in Yankee history in doubles (338), triples (87), runs batted in (1,005) and batting average (.311). He put up better numbers in his career than many of those in the Hall of Fame.

His manager, Miller Huggins, said Meusel’s performance could have been better if his attitude weren’t so indifferent. He was the brother of Irish Meusel, who was a star for the New York Giants.

“Long Bob” was a 6’3″ muscular star for the Yankees. In 1924 Bob charged the mound in a game with Detroit with his bat in hand and went after the pitcher of the Tigers, King Cole. He was upset about a close pitch. It caused a riot that was said to be one of the worst in Major League Baseball history. He was suspended and the participants were fined heavily. It also resulted in a forfeited game.

He was a grim and unpopular character. He was also one of Babe Ruth’s best friends. He and Ruth are the only players to hit for the cycle three times. He led the Yankees five times in stolen bases. He stole second base, third and home in a 1927 game. He stole home twice in a World Series game.

I had not even heard of Meusel until I was looking at the article about Babe Ruth. Meusel put up great numbers but never got a sniff of the Hall of Fame. I think this is because of his attitude and indifference. He probably was not well liked by the people who decided who was going to be in the Hall of Fame.

I found out the reason. He and Bob Meusel were suspended for the first 39 days of the 1922 season. They had participated in a barnstorming session, much like the one they were doing in 1922, after the 1921 season. Commissioner Landis did not approve of their participation in this and suspended them for part of the 1922 season.

Before they came to Perry, there were rumors that the two players were not going to show up because Landis did not approve of them playing unauthorized games for which they were being paid. The rumor was put to rest Thursday, Oct. 12, 1922, when it was announced that Landis authorized the tour.

Ruth and Meusel were to play in Perry and then travel to Lincoln, Neb., on Saturday, Omaha on Sunday and Sioux Falls on Monday. There were numerous other dates in the west and southwest scheduled .

Perry was all hyped up about these two coming to play an exhibition game on a Friday afternoon. I might add here that a high school football game was to be played that day as well, a big game between Perry and their archrivals, the Rams from Jefferson. The baseball would be played at 1:30 p.m., with football to follow.

The Perry town baseball team, managed by J.C. Collins, would be playing a team from Pella. The Babe would play for Perry, and Bob Meusel would play for Pella. Babe Ruth’s appearance in uniform in Perry was his first in Iowa. This made it an important day for the folks in Perry.

General admission to the game was $1, with reserved grandstand seats at $1.50 and box seats at $2.50. Profits went to the Perry American Legion Post, according to Post Commander C. W. Patterson.

The day was a virtual holiday for the city. Most businesses let employees attend the game, and the superintendent of schools said any student bringing a note from a parent would be allowed to attend.

The game was on Friday the 13th. The weatherman had predicted fair weather, but it turned out to be a rainy and cloudy day. It was not enough to rain it out, and the game was played as scheduled.

The huge crowd, though, failed to materialize the way the legion folks thought that it would. The gate was $1,055. There 836 paid admissions. Ruth and Meusel left town with the majority of the gate. The legion figured if they would have had good weather, the gate would have been triple what they took in. Ruth and Meusel were picked up in Des Moines and driven to Perry by a man named John McCarthy.

As far as the game was concerned, both Ruth and Meusel lived up to their reputations. Perry won the game by the score of 12-4. Meusel hit a grand slam home run in the first inning that accounted for all of the Pella team’s runs.

The grand slam came off a pitcher named Eddleman who had been hired from Des Moines to pitch for Perry. Eddleman had pitched in the Western League. He arrived late for the game and, according to him, had not warmed up sufficiently. He must have been right because he shut down the Pella team the rest of the way.

Meusel also had a single, he ended up 2 for 4 with 1 strikeout. Babe Ruth had two triples and a single and ended up 3 for 5. The triples he hit would have been home runs if the park had been enclosed. The ball Meusel hit was not any further than the one Ruth hit, but Meusel was a much faster player than Ruth.

Following the game, the men were guests of honor at a dinner sponsored by the Knights of Columbus at the Hotel Pattee. Babe was said to have visited St. Patrick’s School while he was in Perry.

The Ku Klux Klan was very active in Iowa at that time and had a large and active chapter in Perry. The KKK was very anti-Catholic, but there were no demonstrations while Ruth was in Perry. Ruth was raised by Xaverian Brothers while in their orphanage. This was a Catholic organization as was the Knights of Columbus.

Ruth was such an admired person that the Klan stayed in the background during his visit to Perry. In fact, they sat in the stands that day with Catholics and cheered the Babe as if he were one of them. The Klan has previously burned a cross on the grounds of St. Patrick’s Church, according to sources.

The newspaper story about Ruth’s visit to Perry is still a highly requested archive. People still want to remember that day when the Babe and Bob came to Perry in 1922.

Babe Ruth returned to Iowa in 1940 and made an appearance in Adel. He was to give a hitting exhibition. There was a tournament held in Adel and a crowd of some 5,000. 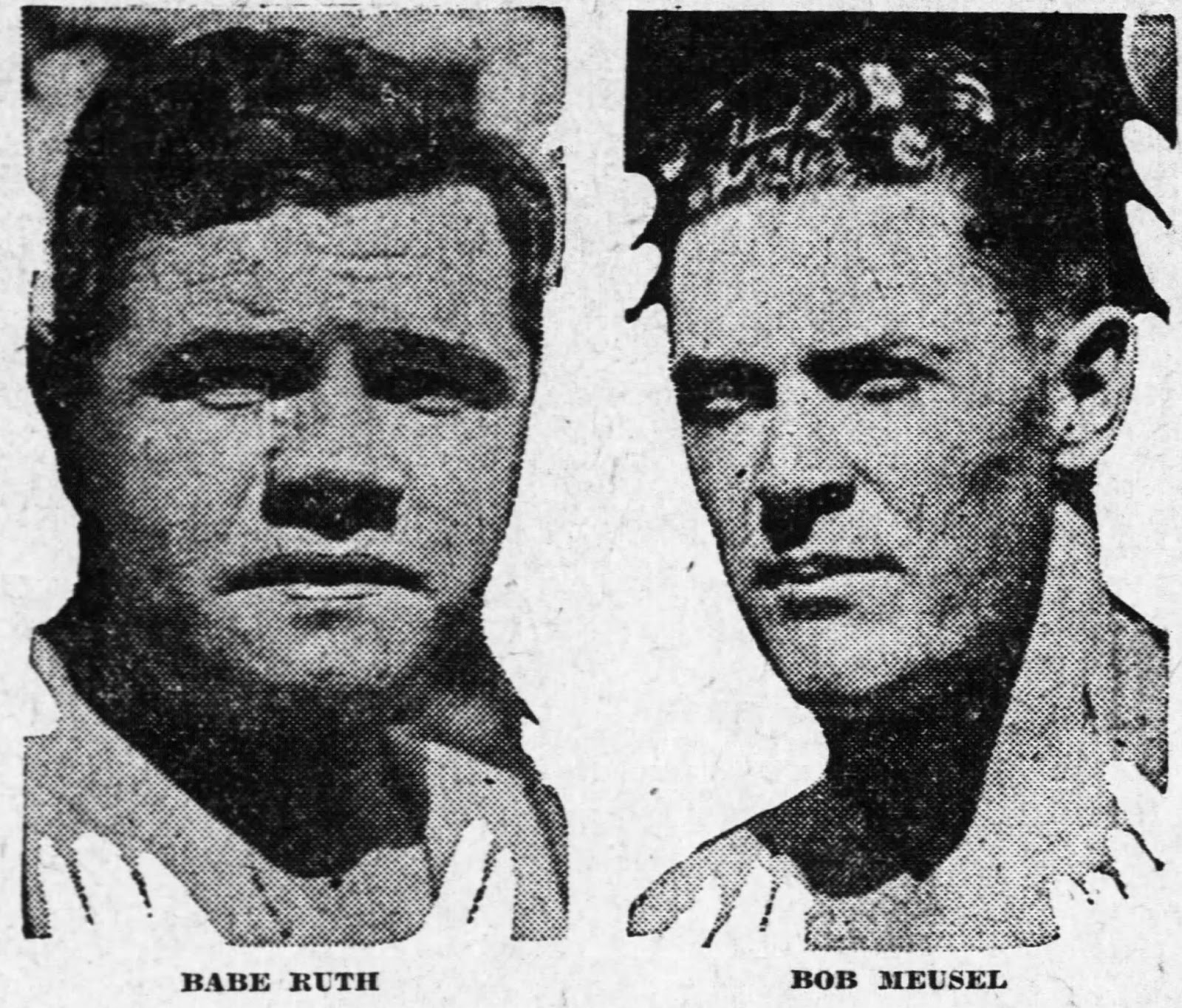