The $500,000 dredging of Drainage District Six was completed about six weeks ago, and the ditch now flows more smoothly with its nitrate-rich runoff than did the process of getting it dredged, which lasted more than three years, took three rounds of contract letting and cost $170,000 more than expected.

The engineer’s original estimate for the work was $394,000. After rejecting a bid of $435,000 in March 2015 from Pleasant Hill-based Elder Corp. because it exceeded the engineer’s estimate by about 10 percent, the Dallas County Board of Supervisors ultimately accepted a bid last May of $565,000, a price more than 40 percent higher than the estimate, from Keosauqua-based Cole Construction Co.

The contract was approved on a split vote of the three supervisors, with then-Chair Brad Golightly and Supervisot Kin Chapman supporting the resolution and Supervisor Mark Hanson opposing.

Bills to Cole Construction for the dredging and excavation work are now falling due, and property-owner assessments are being calculated by the Dallas County Auditor’s office. The auditor sent letters to some 40 landowners in the district in March 2015 and again in May 2015.

Miller said some of the savings would in turn be lost in unplanned bank excavation and stabilization due to soil erosion. He said about $13,000 would be needed to bring in a long-range excavator and bulldozer in order to “smooth out of the spoil pile and make those adjustments that were not included in the plan.” A seam of sand at the toe of the bank is “continually wet and draining,” Miller said, and will require ongoing monitoring and minor maintenance to prevent erosion. 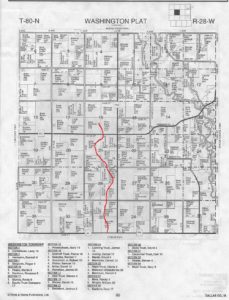 Field tile in Drainage District Six empties into the East Branch of Panther Creek, which rises about one-quarter mile west of Washington Township School and flows southerly and roughly parallel to County Road P58. The stretch between County Road F31 and Iowa Highway 44 is quite flat, with the creek gaining some fall farther south.

Drainage District Six contains 1,735 assessed acres, making it the largest drainage district in Dallas County. Its subsurface tile was laid in 1911, according to county records. A portion of the East Branch ditch was last dredged about 15 years ago, work also done by Cole Construction, but the ditch had since filled again with sediment eroded from the fields, particularly in the half-mile north of 210th Street (County Road F31) and between 210th and 230th streets, according to former Dallas County Engineer Jim George.

Eric Wessels of rural Dallas Center, a commissioner of the Dallas County Soil and Water Conservation District (SWCD), described the project at the time of its letting as a “perfect opportunity to work with the members of the district and the regulatory authority, Dallas County, to address the nutrient contamination issue.”

A year later and with the work now done, Wessels sees the dredging work as a missed opportunity for proactive steps toward water quality in Dallas County.

“Wetlands could have been developed at the point-source discharge to filter the nutrients,” Wessels said. “A bio-reactor could also have been used, but with 1,700 acres it would be an enormous bio-reactor. This was an opportunity, and we missed it.”

Ray Harden of Perry, also a Dallas County SWCD commissioner, said the ditch work was “a good opportunity to put more conservation practices on the land, especially buffer strips along the edge of the ditch. At this time, the stream bank has been planted with grasses, but there should be more planting into the fields, at least 50 feet wide. Grass waterways are also needed in many places to reduce soil erosion.”

Harden also said he “would like to see water coming out of a tile flow into a wetland and not go directly into a ditch or creek.  This would reduce nitrate and soil loss. No applications were made (to the SWCD) for funding to do these projects.”

Do you like this story? Please support our daily coverage of local news and sports with a one-time donation or a recurring donation of $5 per month.