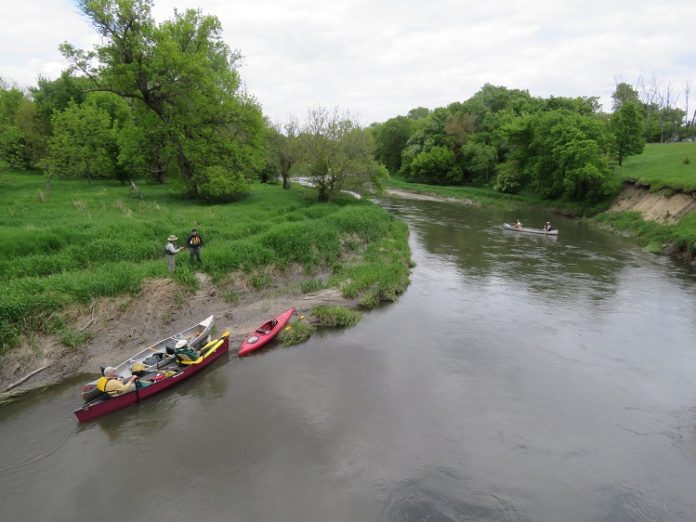 This was not what I expected to see — a wide river valley flood plain, with oak savannahs and tall grass to the river’s edge. It was the first time I had been on this northern part of the North Raccoon River. I am much more familiar with the river between Jefferson and Adel, where the river is wider and the banks are steeper.

Our group of seven men were in three canoes and one kayak. We launched our boats at Vogel Access in the northern part of Sac County. This is the starting point of the 180-mile Raccoon River Trail. Our takeout point for our first day was McDonald Access, about 10 miles downstream.

My canoe partner was nature photographer Ty Smedes. Raccoon River Watershed Association member Mike Delaney and Zack Boyden-Holmes, a photographer for the Des Moines Register, were in the second canoe. Raccoon River Watershed Association members Steve Roe and Rex Harvey were in the third canoe, and Mike Kilen, a reporter for the Des Moines Register, was paddling solo in his kayak.

We probably had traveled less than a mile when we came to a bald eagle nest in a hackberry tree. One of the parents was standing guard on a limb a few feet from the nest. We could not tell if the nest contained any young. During the trip, we recorded 43 different species of birds.

The topography of the land changed as we traveled downstream. The broad flood plain and oak savannas changed to steeper banks with some high bluffs. The eroded bank showed thick layers of glacial till and some tan-colored deposits of windblown loess that were deposited about 14,000 years ago.

One of my concerns during the trip was the number of rock dams on the river. There are 11 of them along the length of the water trail. There was one near the White Horse Access that we easily passed over because the water level was high. During periods of low water, it might be necessary for an inexperienced paddler to portage around these dams.

I thought I would see farm fields tilled to the water’s edge, but there always seemed to be buffers. I also thought the nitrate levels would be much higher than in the river near Perry. I did several chemical tests for nitrate, and all of the readings were in the range of 15 to 20 milligrams per liter, about the same as in the Perry area.

The most egregious farming practice I saw was loose cattle in the river. A herd of about 25 were on one side of the river, and our passing must have frightened them and caused them to want to be with main herd on the other side of the stream. They began to cross the river as we passed, and it seemed like they were either attacking us or wanting to join us in the canoes.

Loose livestock in a stream is a bad practice. Their waste adds to the chemical and bacterial pollution in the water, their hoofs stir up the bottom and they increase bank erosion.

We camped one night at the Sac City Park and for two nights we stayed at a friend’s cabin on the river near Auburn. We ate lunch on sandbars, but our breakfast and evening meals were in restaurants in towns. On day two we paddled from Haggie Access to White Horse, a distance of 13 miles, and on day three we traveled from Grant Park Access to Jackson Access, which is about six miles.

Mike Kilen and Zack Boyden-Holms were doing a story for the Des Moines Register to document the wildlife and recreation value of the upper section of the North Raccoon River. They also interviewed four farmers to get their feeling about the lawsuit filed by the Des Moines Water Works and find out what practices they were using on their land to reduce nutrient runoff. Their two-day story is scheduled to be printed in June.