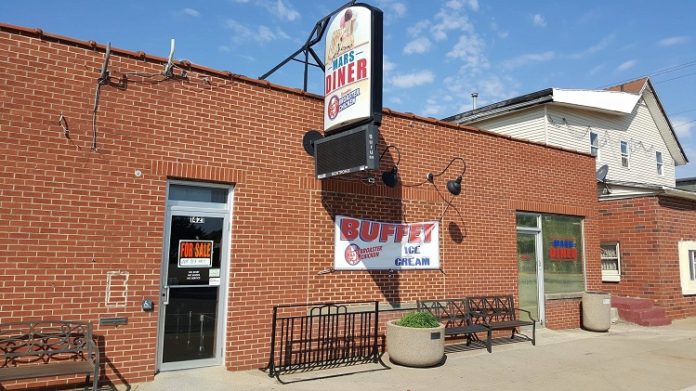 The Mars Diner, a downtown Perry eatery known for its broasted chicken and wide variety of ice cream, is on the market and seeking a new owner.

Gene and Bettijo Roggasch operated the business since the 1990s at 1421 Second St. and built it into a favorite with the local clientele, but Gene’s death Sept. 9 led to its closure.

“She can’t run the restaurant without him, and he couldn’t run it without her, so we have no other choice but to sell it,” said Kirk Roggasch of Tuolumne, Calif., son of Gene and Bettijo. Kirk said he is spending time in Perry, helping his mother sort out the estate.

“Basically, we’re just trying to get it sold — the business, the building, everything — so that someone can reopen it,” Roggasch said. “Everything’s there. It’s turnkey. All they’d need to do is bring in the food, and they could start serving food again. It’s all cleaned out and ready to go.”

He said someone has stepped forth and expressed interest in buying the business.

“I’m just giving him the time to put the financing together,” Roggasch said. “If that happens, his intentions are opening it just like it was. He has shown interest in keeping everything identical. In fact, he wants my mother to go back in there and show him the ropes on how she did things. That would mean a lot to everybody there.”

Perry does not abound in the variety of its restaurants, and Roggasch said the community has an interest in seeing the Mars Diner carry on.

“Perry really needs that restaurant,” he said. “We’re just driving back now from Adel to have lunch, so we’re just hoping it works out for the town.”

“There’s $100,000 worth of machinery in the building, and they paid $65,000 for the building, so right there is $165,000,” Roggasch said, “and that’s not counting any goodwill or anything. They bought all the equipment new. Everything’s in good shape. They’ve been told by the food vendors that the machinery in there is better than anybody else’s in the county.”

As diners familiar with the decor of the Mars Dairy know, its walls were lined with rare images from the history of Perry. The pictures are not the Roggasch’s property but “belong to another gentleman, but he’s already said he’s more than willing to leave them in there if that’s what the new owner decides he wants to do,” Roggasch said.

He also expressed gratitude on behalf of his mother for the sympathy shown by the community with the death of his father.

“A lot of people sent sympathy cards,” he said. “A lot of people know the reason why it was closed. It was just because of my father’s death. Otherwise, they loved running the restaurant and were going to keep it going. That’s what they liked to do. Unfortunately, just one of them can’t do it.”

Gene Roggasch was 82 at the time of his death. He and Bettijo married in 1958 and moved to Perry in 1992. They have three children, nine grandchildren and 12 great-grandchildren.

The pain of losing the Mars Diner has lately been compounded, given the under-abundance of local restaurants, with the temporary closure of Lou’s Diner at 2720 Willis Ave.

“Hood needs repaired again,” a sign on the front door of Lou’s read Saturday. “Will be closed a few weeks. Will put ad in the paper when we can reopen.”

Keep your eye on ThePerryNews.com for Lou’s reopening ad.