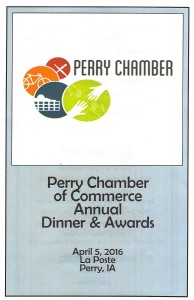 Bob Wilson, executive director of the Perry Chamber and master of ceremonies at the banquet, began the awards portion of the evening’s events by bestowing a silver tumble on Chamber Past President Samantha Smith. Wilson also thanked volunteers Julie Scheib, Misty VonBehren and Andy Wolter.

This year’s banquet was held at La Poste LLC, and the ladies of La Poste were also awarded the 2016 Business of the Year Award.

Jenny Eklund, until recently the owner of Perry Paint and Design and now working full-time delivering hospitality services at La Poste LLC, accepted the award on behalf of the ladies’ collective and charmed the Chamber membership with her witty speech.

“I want y’all to go home knowing one thing,” Eklund said, “how much the Ladies of La Poste appreciate you, your help, your support and your ideas.” 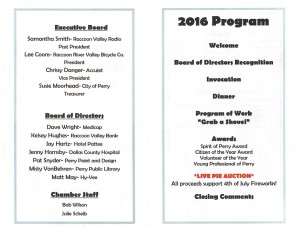 Perry High School Head Boys Basketball Coach Ned Menke received the Citizen of the Year award for his dedication to the moral development of Perry youth.

Menke said when he moved to Perry 10 years ago, he “immediately felt the love and the pride that there is for this town.” He also noted he met his wife in Perry, and they are raising their children here. 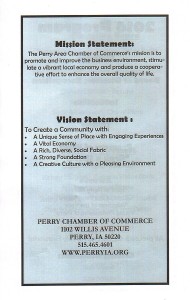 The Young Professional of the Year was awarded to Matt McDevitt, credit analyst at the Raccoon Valley Bank.

“Nothing and no individual is really above the team,” McDevitt said of Perry and its commercial community. “Perry is unique in that it has a great team in place that are really helping this community to be present, to move forward into the next generation, to not be like some of the other small towns who cease to exist.”

Wilson noted Finneseth’s many years of devotion to the BRR Bike Ride to Rippey and many other local events.

The first winner of the Jack Finneseth Volunteer of the Year Award was Linda Kaufman, retired English instructor at Perry High School and the person responsible for several notable Perry events at PHS, such as the Veterans Day celebration and the annual Volunteer Day.

The self-effacing Kaufman emerged from the scullery to accept her award.

“I’d much rather be in the back than in the front,” Kaufman said modestly. “This makes me very uncomfortable because I look a lot better on paper than I do really. I think a lot of people do as much as I do or more.”

The annual pie auction ended the annual evening, with $3,300 raised toward the Fourth of July fireworks display, sponsored by the Chamber. Fireworks fundraising continues Thursday with an online auction starting at 8 a.m.