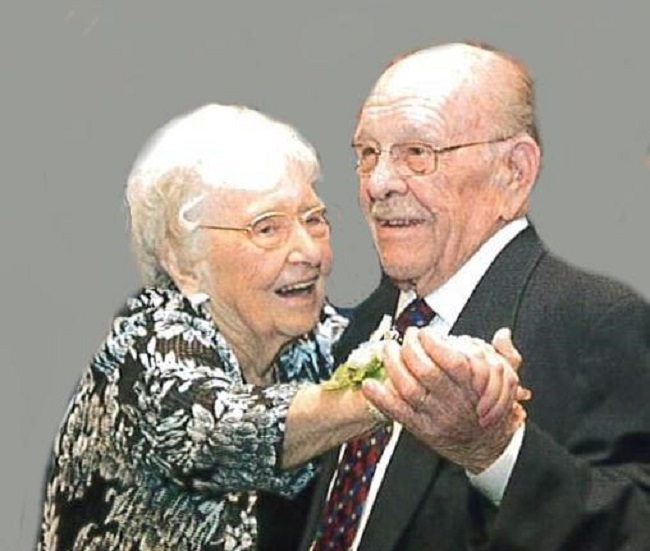 Charlie and Edith left behind a lifetime of memories with friends and family with notable connections to the American Legion, Elks Club, Lions Club, Red Hat Club and the communities of Minburn and Perry, in which they lived and worked.

They were also members of the United Methodist Church of Minburn for all 70 years of their marriage. In fact, they were the first marriage in the rebuilt church on Sept. 3, 1950.

Charlie served two years in the U.S. Army during the Korean War but worked primarily in the trucking industry, hauling fuel for the Minburn Cooperative Elevator as well as fuel and goods for Farmland Industries. Edith was a longtime bookkeeper and receptionist for Lauterbach Chevrolet in Perry before performing similar duties in semi-retirement for Stokely Lumber in Perry.

Despite their unquestionable work ethic, they made time for as many family functions as possible. They had three generations of events to attend, including countless reunions, weddings, baptisms, confirmations and graduations. Nothing made them prouder than the accomplishments of their descendants. They took special pride in the genuine friendships the entire family has forged through the years.

After retirement, Charlie and Edith spent their winters in Mesa, Arizona, and the rest of the year in Perry. They loved the change of seasons but felt they had seen enough snow to last them a lifetime! Plus, Valle de Oro in Mesa provided them with the perfect combination of the things they enjoyed the most: camping in their fifth wheel trailer, dancing under the stars, potluck meals and the dozens of friendships they forged there.

Left to carry on their legacy are their children, Miichael Thompson, Teresa Thompson and Ray (Erica) Thompson; Charlie’s brother and sister, Roger (Marie) Thompson and Carmen (Dick) Walgrave; and Edith’s sisters, Louise Erwin and Marie Dawson. They have eight grandchildren and nine great-grandchildren who will remember time with their grandparents fondly and miss them dearly.

,As they so frequently danced with us all, they will now be dancing in heaven looking down upon us with the same care and love as they held for us here on earth.

An 11 a.m. memorial service for Charlie and Edith will be held Saturday, June 19, 2021, at Minburn United Methodist Church. Burial will follow at Elmwood Cemetery. A visitation will begin at 10 a.m. prior to the service. Contributions may be made to Minburn United Methodist Church in Charlie and Edith’s name. Murdock Funeral Home is in charge of services.