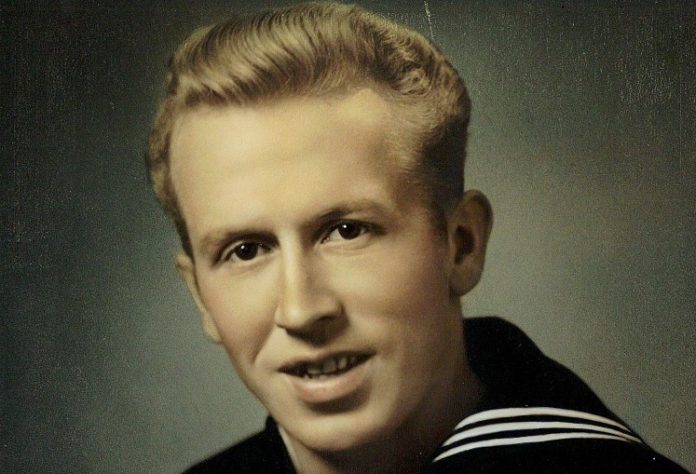 Charles “Chuck” Smith was born in 1940 to Bridget (Nolan) Smith and Lawrence Smith in Goodell, Iowa.

He graduated from St. Cecelia’s Catholic School in Algona, Iowa, in 1958.

Chuck then served in the U.S. Navy from 1959 to 1963 aboard the USS Lexington and the USS Essex. Chuck loved his time spent in the Navy with his brother Joe. They had many entertaining stories about their travels around the world, and Chuck was rarely without his USS Lexington ball cap.

After discharge, he worked for North Central Public Service (MidAmerican Energy) and retired after 22 years. He then worked for Dallas County Hospital in Perry for another 10 years.

Chuck married Myrna Mino on July 16, 1966, and they were married for 53 years. He was the father of six children: April, Lynda, Charles Jr., Toni, Steve and Nick.

Chuck loved his kids and watching all the activities they participated in. He spent many a summer rotating between softball/baseball fields, watching his five kids play. Many more summer nights were spent going to the drive-in theater. Winters were spent watching basketball, volleyball and wrestling at Perry High School.

When not watching his kids play sports, he could be found watching wrestling, boxing and any kind of auto racing.

He took lots of pride in his kids’ graduating college, having successful careers and being good parents. He was the proud grandfather to Connor, Seth, Kiley, Aubrey and Ella.

Chuck worked hard and provided his family with everything they needed. He set a great work ethic example for his kids.

Chuck never met an appliance he couldn’t fix or a home repair he wouldn’t tackle. He enjoyed puttering around the yard on his riding lawn mower. He could also be found at his kids’ houses, helping out with home improvements, yard work and friendly reminders for checking oil, tire pressure and smoke alarms.

Chuck was preceded in death by his parents; sisters, Noreen, Barb and Helen; brother, Joe; and three children, Charles Jr., Lynda and Nick.

Chuck passed away Friday, March 27, 2020, at Mercy One in Des Moines, Iowa. Due to state and federal guidance on gatherings, the family will not be having a public memorial at this time. A visitation and funeral mass will be held at a later date. Murdock Funeral Home is in charge of arrangements.