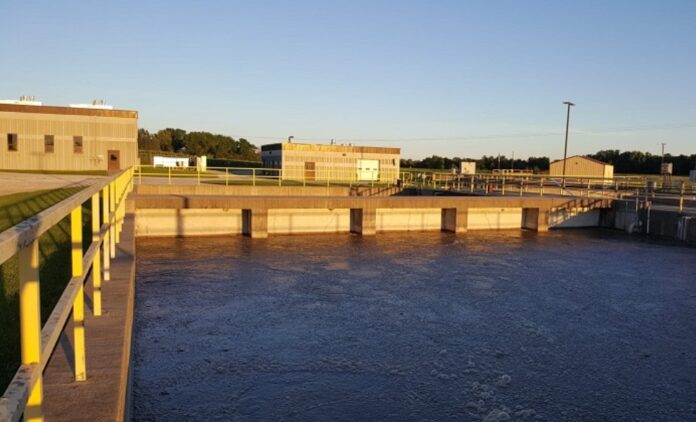 The Perry City Council approved Monday a plan to seek a $29 million state loan as part of the highest-priced public works project ever undertaken by the city government. The action followed the council’s acceptance May 3 of Woodruff Construction Co.’s $27.2 million bid on plans to upgrade the city’s waste water treatment plant.

The Woodruff bid was about 50% higher than the 2018 estimate of $18 million for the improvements to the Perry Water Pollution Control Facility, but since the Iowa Department of Natural Resources (DNR) began imposing stricter standards for nutrient discharges by municipal waste water treatment plants, many Iowa cities have started upgrading their sewer systems, competing for limited resources and driving up prices.

Livestock and row-crop farming account for about 92% of the nutrient pollution in Iowa waterways, according to the Iowa Nutrient Reduction Strategy.

In recommending that the city council accept the Woodruff bid, Bolton and Menk Project Manager Matt Ferrier said federal stimulus dollars through the American Jobs Plan are expected to start flowing into the market over the coming months, putting upward pressure on prices and making it harder to find contractors.

“Myself and our team all feel like we would recommend at this point that we should award it,” Ferrier told the council. “With concern over who we would get as a contractor later, the availability of contractors at that time, continued prices going up — there’s so much uncertainty in it that we generally feel like it’s the best thing for the community to do at this point.”

The State Revolving Fund (SRF) loan will be jointly administered by the DNR and the Iowa Finance Authority and will carry a 2% interest rate over 30 years. The loan will be repaid through higher sewer rates charged to the city’s sewer users.

The following tables show the approximate increases projected for the monthly sewer-availability rates and the monthly usage fees:

The 2% interest rate is lower than the standard 3% for SRF loans because Perry qualifies for Disadvantaged Community Status with the DNR, according to Susanne Gerlach, director of PFM Financial Advisors LLC. Communities that experience “substantial and widespread economic and social impact” from sewer-system costs qualify for the lower interest rate.

“One positive thing that we are very confident about,” Gerlach told the city council, “is we think we’re getting this project approved through the Disadvantaged Community Status, which means that you get a lower interest rate on your SRF loan.” She said the lower rate will save the city about $200,000 yearly over the life of the loan.

Perry’s is one of about 140 projects across the state seeking SRF loans, according to data from the SRF.

The upgrade plan calls for the replacement or renovation of more than a dozen structures at the sewer plant — from a new clarifier basin, anoxic basin and influent lift station to a new UV building, biosolids pump building and effluent lift station.

The original plan included $2 million in improvements to the city’s sanitary sewer collection system, the underground pipes that bring the waste to treatment, but those improvements were omitted from the revised design. Federal infrastructure funds might become available for use on improving the city’s sewer lines, Ferrier said.

The upgrades will mark the first significant improvements to the treatment plant since 1998. Perry’s first sewer system was built in 1905, with an outflow pipe carrying raw sewage straight to the Raccoon River. In 1939 Perry’s first sewage disposal plant, with a rock filter and digester tanks, was built using funds from the Depression-era Works Project Administration. In 1969 the city spent $400,000 on “improvements and extensions” to the sewer plant, and in 1993 a major upgrade was made for $3.9 million. Mechanical problems with the new system led to further changes in 1998 at a cost to sewer users of $2.2 million.