Construction of the four-field Pattee Park Soccer Complex officially began Wednesday morning with a groundbreaking ceremony at the site of the project between W. Fifth Street and Diagonal Road.

The $680,000 complex will be built west of the Pattee Park baseball and softball diamonds and will feature the four soccer pitches plus a wetland buffer trail and retention pond.

About 25 people attended the groundbreaking, which drew Perry city officials, the Polk City contractor who will build the complex and several local stakeholders, including the project’s largest private donor, Tyson Fresh Meats.

“It’s a city project, but obviously it’s in conjunction with the private sector, and that’s how great things happen in Perry,” said Perry Mayor Jay Pattee prior to turning the sod. “Tyson is a great corporate citizen. They got this thing off and rolling with a substantial donation, so special thanks to them and all those who gave to this project. It’s going to be exciting to watch.”

Tyson donated $100,000 toward the buffer trail and retention pond, part of the project’s first phase. The city of Perry was also awarded an Iowa Department of Transportation Resource Enhancement and Protection (REAP) grant of $100,000 in October 2014 to pay for the phase I pond and buffer., and the city made a matching contribution of $38,480.

Along with the large Tyson pledge, donations by other local business, industry and civic groups have also advanced the project. The Perry Soccer Club, ITC, the Hotel Pattee and the Bock Family Foundation have all contributed.

The Perry City Council in February accepted a $450,000 bid for the job from Polk City-based Spring Lake Construction. 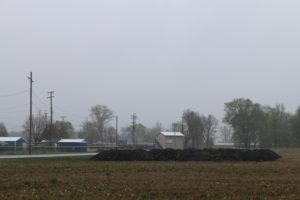 “The size of that parking lot is pretty much going to be based on how many loads of millings we get from the overlay project,” Peterson said. “We’ll be able to use what would have been the waste from the overlay milling of the roads as the parking lot surface. The timing of that project really worked out very well for the city.”

Plans for the soccer complex were first unveiled in August 2014. The Perry Soccer Club immediately donated $10,000 toward the soccer field portion of the Pattee Park complex, with the Hotel Pattee adding another $5,000 to the fund. The Tyson donation was pledged in summer 2015.