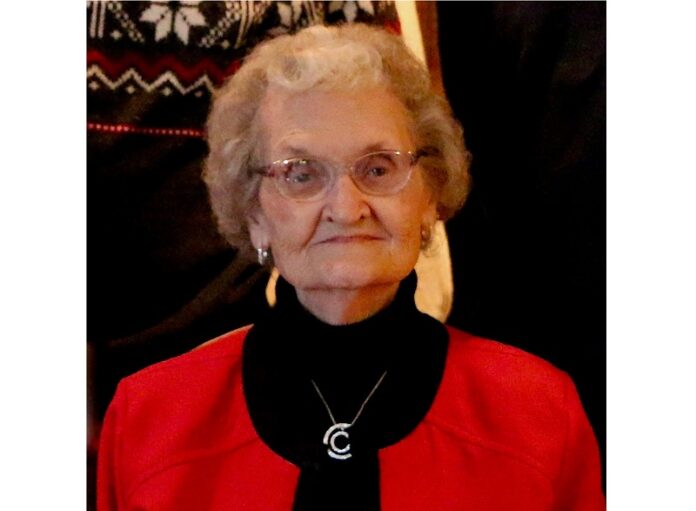 Funeral services Clara Maxine Topping, 92, of Urbandale and formerly of Perry will be held Saturday, Jan. 28 at 10 a.m. at the Carris Family Funeral Home and Cremation Care in Perry, with visitation beginning at 9 a.m. until the time of the service. Burial will be at the Dallas Township Cemetery in rural Dawson, Iowa.

Maxine grew up on her family farm in Greene County and graduated from Rippey High School. She loved playing basketball and was a sports fan all of her life.

After high school, she moved to Perry and met the love of her life, Bob Topping, at a softball game. Maxine and Bob were united in marriage at the Perry Methodist Church on May 16, 1952.

Maxine and Bob lived in Dawson, where they raised their children, Twila and Tony.

Maxine was a member of the Dawson Methodist Church and its Ruth Circle.

Maxine worked 20 years for the U.S. Postal Service in Dawson as a clerk and later as  Postmaster. After retirement, Maxine and Bob moved to Perry.

Maxine had a love of music, reading her Bible, gardening and travel. She and Bob also enjoyed winters in Arizona for many years.

Maxine had a sweet tooth and was known for her cinnamon rolls and homemade ice cream.

Her true calling came as a grandmother. She and Bob were faithful fans at their grandsons’ sporting events and activities.

The family thanks the staff at Spring Valley Retirement Community, Deerfield RCF and Hospice of the Midwest for their compassion and care.

Memorials can be directed to the Perry Emergency Food Pantry or Puppy Jake Foundation to support our veterans and may be left at the funeral home. Online condolences may be left at www.carrisfuneralhome.com.