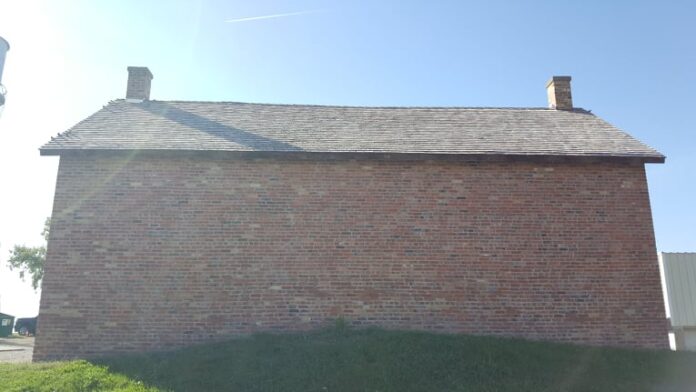 Restoration work is nearly done on the 150-year-old coach house, the oldest surviving structure on the grounds of the Dallas County poor farm, now known as the Human Services Campus at 25747 N Ave. on U.S. Highway 169 north of Adel.

The Dallas County Supervisors awarded a $114,130 contract for the work in June to the Samuels Group, the same company that provided construction management of the new $20 million Dallas County Law Enforcement Center.

Before sending out its request for proposals, the supervisors met with longtime Dallas County Care Facility Director Karen Smith, who shared some historical details about the carriage house, which she estimated to date from about 1874 or 1875. Smith retired in 2006 after running the care facility for 32 years.

The Dallas County poor farm was established June 9, 1869, with the purchase of 200 acres of farmland from one Cyrus Hemphill. An 1875 report on the farm by Dallas County Supervisor Lem Warford made no mention of a carriage house, but it did note that the “fences are in good repair, buildings all new and in good order. The dwelling-house is 30 by 45 feet. There are 13 rooms in the house and a good cellar under the house.”

In 1885 the county supervisors laid out $4,000 to erect a new “building for the incurably insane,” which was judged by the editor of the Dallas County News to be “a wise and economical move on the part of the Board and will meet with the hearty approbation of tax-payers of the county.”

The coach house was not itemized by the editor, who did note that the “building under contract for creation on the county farm for the use of the insane is to be a two-story building 32×14. It will contain 13 cells, two dining rooms, one tank room, two water closets and two large halls, and will be heated by steam.”

Smith said the carriage house received a new roof and replacement windows sometime before Jan. 1, 1998, when the care facility was privatized. The supervisors closed the facility in 2014 after the few remaining residents were relocated, and then they sunk $5.5 million into remodeling the building for use as office space. It reopened in 2016.

Once restoration of the coach house got underway this summer, the Samuels Group workers discovered that water had rotted most of the floor joists. In August the supervisors approved spending an additional $47,000 to replace the rotted joists — two of the original joists were salvaged — as well as replace the concrete approach, including installing drainage tile.

In addition, the brick building has now been tuck pointed, and it has a new shake roof, new window frames and sills, new lights and new doors. Smith said the previous doors of the coach house were sliding or bi-fold doors that were later replaced with more modern garage doors.

The supervisors have yet to settle on the status of the restored carriage house. The Des Moines Area Community College agronomy department has leased the farmland, barns and stockyards since 2005, using the property as a laboratory for its agribusiness program.

Perry woman allegedly urges neighbor to ‘blow her brains out’