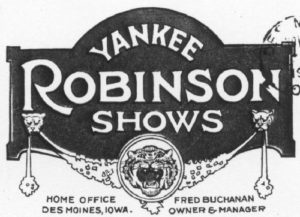 When the last standing outbuilding of the old Yankee Robinson Shows collapsed along Iowa Highway 141 east of Granger last week, the dust it raised did not mark the end of an era. The era of wagon circuses and railroad circuses ended 85 years ago, smothered by the Great Depression.

But the fall of the last Yanktown barn raised some historical dust. The Ringling Brothers of McGregor, Iowa, got their start as circus masters in the late 1880s and by the time Fred Buchanan of Granger got into the game in 1906, the traveling circuses, with their lavish parades down the main streets of small towns, were a booming business.

Buchanan named his circus after pioneer showman Fayette L. “Yankee” Robinson, a mentor to the Ringling Brothers. Robinson is buried in Jefferson, where he “died while passing through town on a train,” according to local historian Mike Hegstrom. “His body was left in the care and keeping of the local Masonic Lodge. The Masons bought a plot and arranged for burial, and later the Ringling Bros erected a fine monument on his grave.”

The Yank Show, as Buchanan called his Granger-based circus, soon established itself as the Midwest leader among medium-sized circuses. The show converted from wagons to rails in 1908 and continued growing.

Buchanan’s farmstead lay about two miles southeast of Granger, and it served as winter and spring quarters for his circuses. The electrified Interurban Railroad ran past the farm, and Buchanan powered his farm using the Interurban’s electricity. He built a sidetrack with five cars and also arranged for a rail stop at the farm, which he called Yanktown.

At its height, the circus grounds in Granger had 20 buildings. The spot was a favorite for visitors from Des Moines and the surrounding area.

According to circus historian Jacob Wagner, “These winter quarters were visited daily during the season by men, women and children, who watched the six- and eight-horse drivers train the beautiful draft horses into six-, eight- and ten-horse teams as they prepared to start on their summer tour. Their harness was made by Christy, the Des Moines harness and leather man.”

Buchanan preserved the large, elaborate street parades through the ‘teens and ’20s, when other circuses were moving away from them. For instance, he inherited from Barnum and Bailey their ornate “Two Hemispheres” wagon, which originally cost $40,000 and weighed 16 tons.

He acquired more and more animals, first draft horses and then more exotic species, such as elephants. The midway featured the standard attractions — ferris wheel and merry-go-round — and the gaming stands tolerated a respectable number of grifters or grafters.

The commercial amusement prospered through the 1920s and Buchanan, shrewd in the way of business, sold the show — and even delivered it — to an outfit in Lancaster, Mo., in 1920. He then managed Patterson’s Four-Ring Wild Animal Circus before returning in 1923 with a 15-car extravaganza of his own called the World Brothers Circus. The name changed the next year to the Robbins Brothers Circus.

Buchanan’s circus fortunes peaked in 1930 and also completely crashed the same year, as the Roaring ‘Twenties gave way to the Hungry ‘Thirties. Surplus cars were sent back to Granger, and the remains of the show were sold to the outfit in Lancaster, Mo. Buchanan then disappeared from the annals, leaving only the outbuildings behind in Granger, the last of which fell just the other day.

The grounds of the old Yanktown are said to hold the bones of the only elephant graveyard in Iowa.

Circuses still pass through these parts. Granger was visited as recently as last summer. But the golden age of circuses, in which Iowa figures prominently, passed by with the Yankee Robinson Shows.

For more local history, become a $5-per-month donor to ThePerryNews.com. To get started, simply click the Paypal link below.