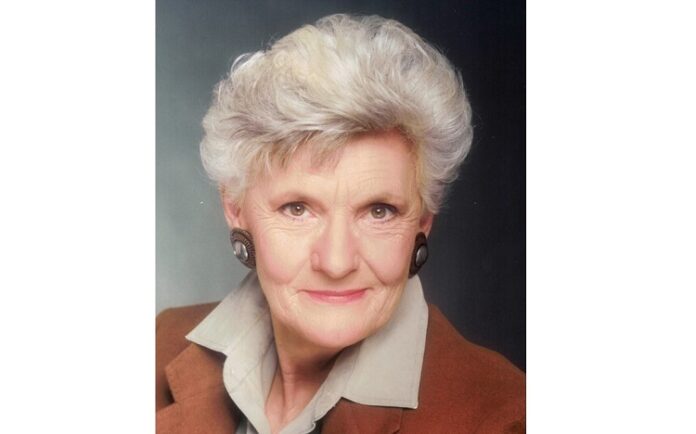 “Full of fun and mischief, too; always doing things she shouldn’t do! Her senior class tagged her yearbook picture with this saying. She sure lived up to this!

Let us tell you a little about our mom, Colleen. She was known to be the life of the party with her vibrant personality and great sense of humor! Mom’s passions were family, friends, traveling, sports, cocktails, ice cream, music, and there wasn’t a dance floor she didn’t take a spin around!

George and Hazel Goudy brought a baby girl into this world in Ottumwa, Iowa, on June 28, 1931. She was a coal miner’s daughter. Her parent’s imagination waned when it was time to name their baby girl. A light bulb went off, and they thought born in June let’s call her June! Mom hated the name June! She always wanted to be called Colleen or as she was fondly called by friends, “Coke”, “Coco” or “Ma.”

The family moved to Woodward, Iowa, where mom attended K-12 school years. She graduated in 1949 as a proud Hawkette. She played basketball, cheered and sang in the Glee Club. She was a member of the high school paper and yearbook and was the Class Secretary. She must have been a “Jill-of-all-trades.”

Mom made the move to Perry, Iowa, in 1953. She raised two daughters and a son” Diana, Denise and Jeffrey. Of course, Jeff was her favorite! Even though she had demanding jobs, she supported her children in all their activities. You could hear her cheer (yelling) from the stands and clapping in the audience. Life threw her a curve ball when Jeff unexpectedly passed away in October 1984. We know she is happy to see her parents and Jeff again.

She started her career with the city of Perry in 1965 as City Treasurer. At the time, it was an elected position. She couldn’t believe it when the voters re-elected her. Of course, she was running unopposed! For some reason unknown to us, she was promoted in 1969 to Water Board Clerk. By 1972, she must have had them fooled in to thinking she could handle anything, so they named her City Clerk. Remarkably, she was able to survive in this position until retirement in 1989!

Dubbed by their friends as the “Golden Girls,” mom was the strong-willed Dorothy, Phyllis was absent-minded Rose, Blanche was the Southern Belle Blanche, and our grandma Hazel was the matriarch, Sophia. These ladies could entertain themselves and others while sipping on cocktails. These friendships lasted many years, and mom (aka Dorothy) was the last surviving member of the girls.

In 1992, mom and grandma packed their bags and moved to the sunshine state of Arizona. Her sons-in-law were thrilled as she picked the month of August with temps of 120 degrees to move. Mom’s timing was everything!

Mom’s favorite holiday was Christmas. Every year on Thanksgiving, she told the guys to put up outdoor decorations. Didn’t matter if it was five degrees out with a wind chill of -20, it had to be done that day. One Christmas morning her grandson asked her who is “LEON”? Mom replied, I don’t know any LEON. Her grandson opened the front door, pointed to the door hanging and said, This “LEON.” Mom burst out laughing and said, “Oh, my, I hung it upside down. It should read NOEL!” LEON came for Christmas every year!

Mom decided to move back to Perry in 2013 to Spring Valley Assisted Living and then moved to Spurgeon Manor in Dallas Center in 2018 until her death.

Mom’s wishes were for a private graveside service in Violet Hill Cemetery. Memorials may be left at Carris Family Funeral Home and Cremation Care. Online condolences may be sent at www.carrisfuneralhome.com.