Deteriorating conditions at Kaufman Track have led the Perry schools to cancel all four home track meets that would have been held this spring.

“This was a joint decision between myself, (Superintendent) Clark Wicks and our track coaches,” Perry Activities Director Scott Pierce said. “We all agreed that is simply unsafe for us to host competitions at the current time.”

Pierce said the temporary filling of cracks and splits will allow the track teams to practice on the surface, albeit with certain areas and certain lanes marked off. It is hoped the patchwork will enable to community to continue to make use of the track.

Repairs and/or replacing the track were an initial part of Phase III of the Dewey Field renovation project. Space limitations would mean any decision to increase from the current six lanes to an eight-lane track would mean extending both straight stretches to the east and west, thus making the corners a tighter turn than normal. No decision on the matter has been made.

The district is considering their options for paying for the track replacement. Involved in the process would be the creation of a new high jump area beyond the east end zone. The potential relocation of the long jump area is also to be considered.

The choice to not host meets at home — combined with a likely timetable for replacement — would almost assure no meets would be at home in the spring of 2022 as well, a situation Pierce acknowledged.

“It will be tough for the kids and everyone else, not having these home meets, but we are in a situation that must be addressed,” he said. “We just need to look ahead and see it as a part of the progress we are making with our facilities and our dedication to have competitive teams in all sports.” 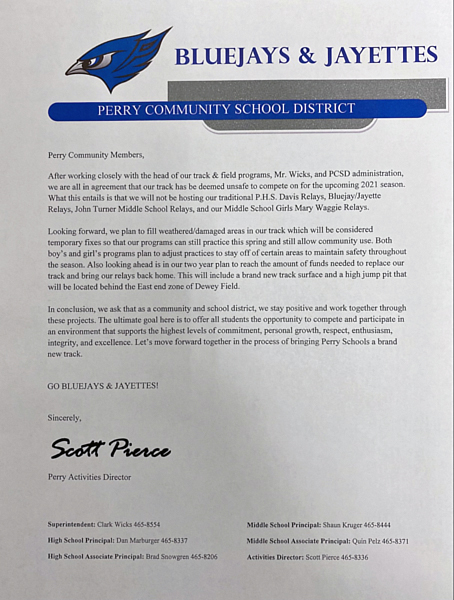