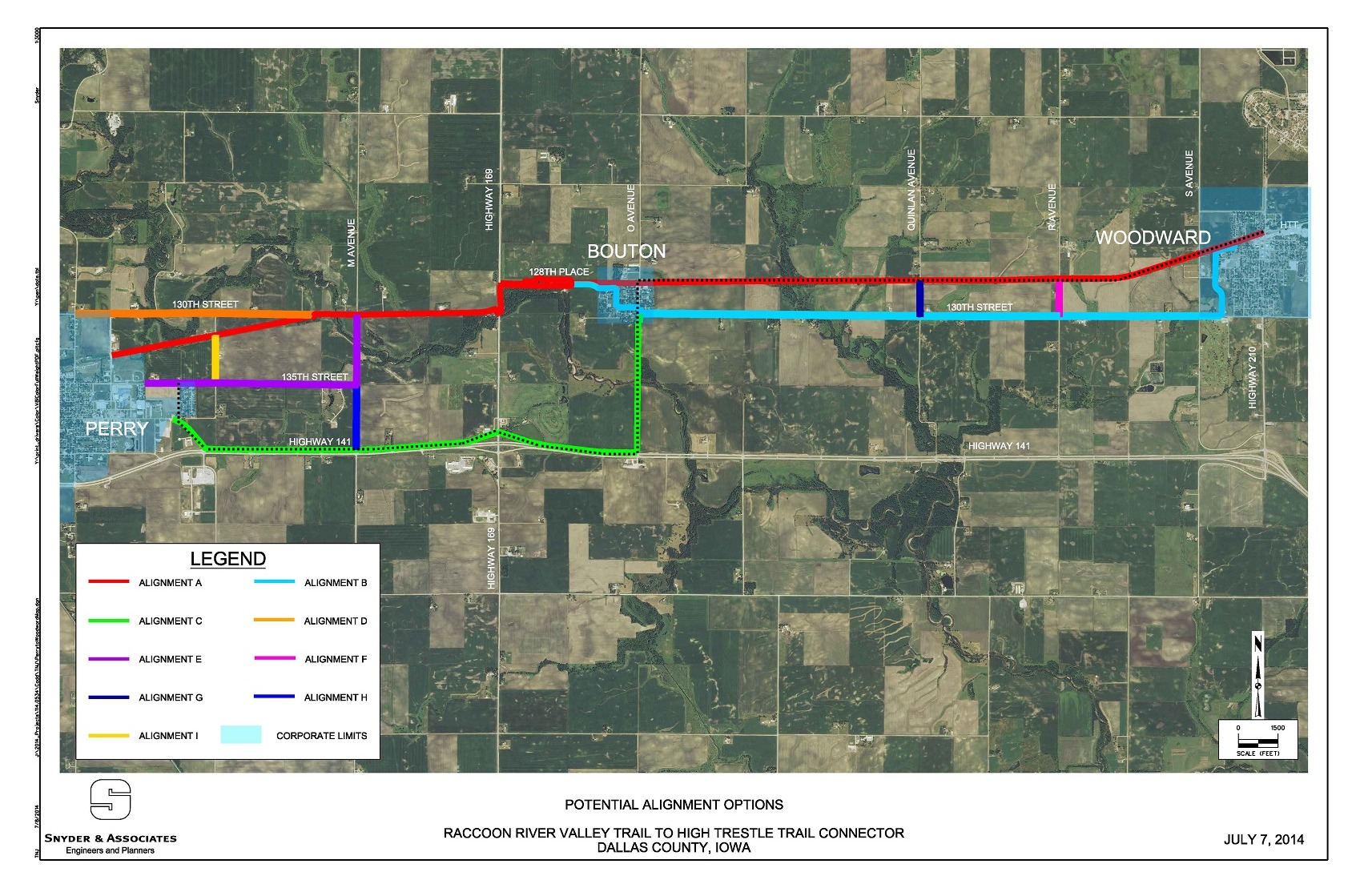 Seeing was believing Tuesday night for the Dallas County Conservation Board when they took a driving tour of possible routes for a bike trail linking the Raccoon River Valley Trail in Perry and the High Trestle Trail in Woodward.

After discussing strengths, weaknesses and costs of the alternative routes, the board voted unanimously to pursue building a trail along Iowa Highway 141 running easterly from Perry to O Avenue, then northerly along O Avenue into Bouton, then easterly to Woodward along the former railroad right of way.

A plan B for the Bouton-to-Woodward leg would see the trail running easterly along County Road R30.

The Perry-to-Bouton leg of the link trail has proven the most challenging in terms of land acquisition and narrow roads.

“It’s one thing to look at this on a map,” said Dallas County Conservation Board Vice Chair Mark Powell, “but now I see what a bear it would be to try to connect to Bouton from Perry. It makes perfect sense to use 141.”

Powell chaired the Tuesday night meeting in the absence of board chair Lorinda Inman, who joined the meeting by phone link after the tour.

“Highway 141 is the easiest route,” said board member Glenn Vondra. “It’s not the most scenic route, but it lets us stay away from gravel roads.”

Richard M. Voelker, lead architect on the link-trail project with Ankeny-based Snyder and Associates, accompanied the conservation board on its driving tour and explained features of the alternative routes.

The preferred route to Bouton, running along the former railroad right of way easterly out of Perry and then easterly along 130th Street to U.S. Highway 169, faces “an extreme lack of room and some serious drainage issues,” Voelker said.

What Voelker called “the fallback-fallback plan” is what the board finally chose: a trail along Iowa Highway 141.

The total length of a route from Perry to Woodward is about nine miles.

In order to encourage public input on the route question, the conservation board has scheduled two public hearings: May 18 at 7 p.m. at the Dallas County Conservation offices in Perry and May 28 at 7 p.m. in Waukee at a venue to be determined. Other informational meetings will be held in other locales, according to the board.

The conservation board also heard a proposal at Tuesday night’s meeting from Michael A. Lipsman, economist and planner with West Des Moines-based Strategic Economics Group, who specialize in tracking and analyzing national, regional and state economic trends. Lipsman’s firm would analyze profile data on Raccoon River Valley Trail users and produce a report on strategies for economic development around the recreational trail system.

The board gave Lipsman the go ahead to submit a proposal for its consideration at the May meeting.