Susie Moorhead, Perry’s finance officer, has been burning the midnight oil through January in preparation for the rounds of meetings and workshops with both city council members and the heads of Perry’s seven service departments: public safety, public works, health and social services, culture and recreation, community and economic development, business-type activities and general government.

The first round of departmental capital requests for next year added up to about $3 million. Since the city forecasts about $648,000 available for capital expenditures, the department heads will have to prioritize and pare back their wish lists in the second round until a balance is struck.

The Iowa Legislature has been threatening for several years to phase out the commercial and industrial property tax reimbursements, also known as the backfill, that followed their 2013 tax cut. The burden in lost revenues fell entirely on local taxing entities, such as cities, counties and school districts, and the backfill was intended to compensate them for the shock to their budgets.

Last year the legislature considered two different phase-out timelines — a three-year and a six-year phase out — based on whether a taxing jurisdiction is above or below the average statewide growth in taxable value of all classes of property from FY 2014 to FY 2019.

The city of Perry showed negative growth in the taxable value of its commercial and industrial properties during the five-year period — values declined .15 percent, from $157.7 million to $157.5 million. The six-year phase out would see the city’s share of the state backfill shrink from about $72,000 in FY 2020 to $12,000 in FY 2025 before disappearing entirely in FY26.

Also on the revenue side, Moorhead said the city is expected to take in about $10.6 million in FY 2020, about $1 million more than it collected in FY 2019. Revenue sources include an estimated $2.95 million in property taxes, $1.4 million in Local Option Sales Taxes and $1 million in Iowa road use taxes, with the balance coming from fees, service charges and other sources. General fund revenues are estimated to be about $3.68 million.

Total expenditures for FY 2020 are budgeted at $9.18 million, including general fund spending of about $3.6 million.

Wages for Perry workers in the Teamsters and AFSCME unions are currently in negotiation but are expected to be 3 percent for both unions, Moorhead said. An 8.2 percent increase in health insurance premiums will cost the taxpayers about $656,000, even with employees set to start paying 15 percent of their premiums.

“So far, this year’s budget looks to be in better shape than we have seen in the past,” Peterson said. “It looks like we are going to be able to accomplish several goals we have been working towards regarding our operations, staffing and our levy rate. This success is due in large part to our departments working efficiently within our budget. With this initial budget proposal, it looks like we will be able to lower our levy rate for the next fiscal year.”

A second round of department meetings will follow next week and a second council workshop Feb. 15, with public hearings on the proposed budget set for Tuesday, Feb. 20 and Monday, March 4. Perry residents are encouraged to attend both the workshop and the council meeting in the Clarion Room of the Security Bank Building at 1102 Willis Ave.

January and February’s number-crunching will come to a vote Monday, March 4, after the second of the Perry City Council’s public hearing. The budget must be submitted to the Dallas County Auditor by March 15, and the 2020 fiscal year will start July 1, 2019. 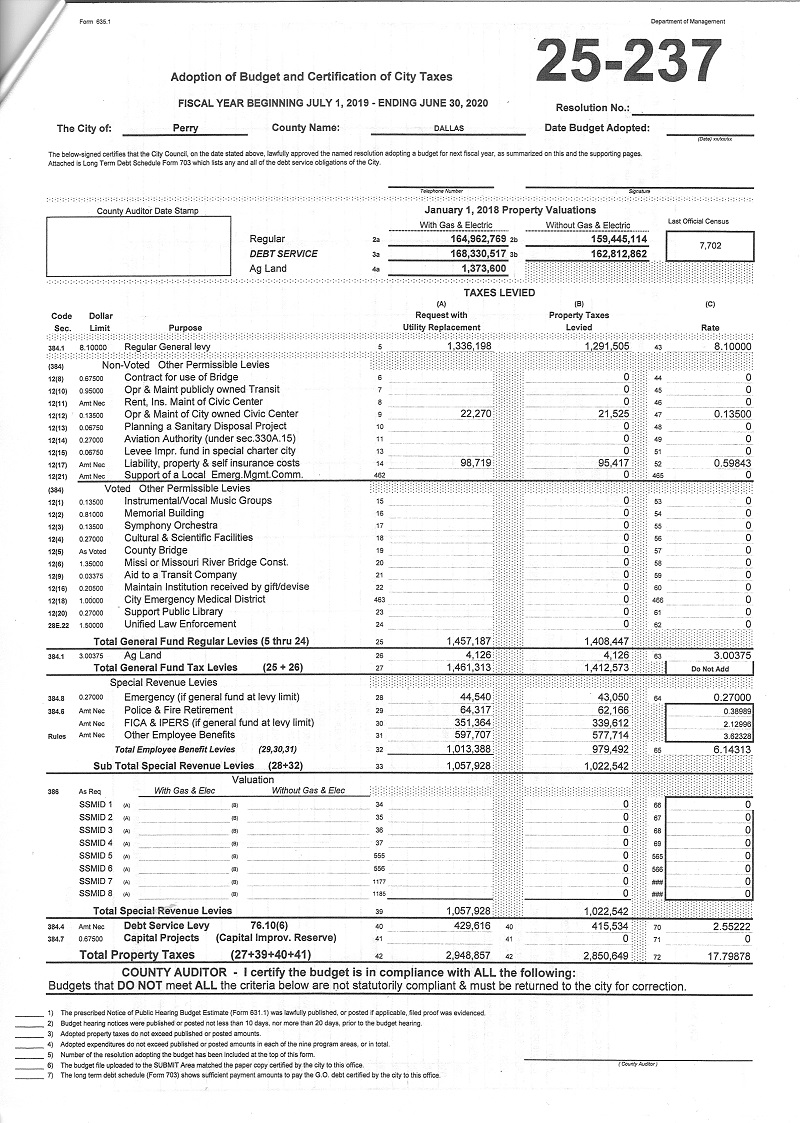