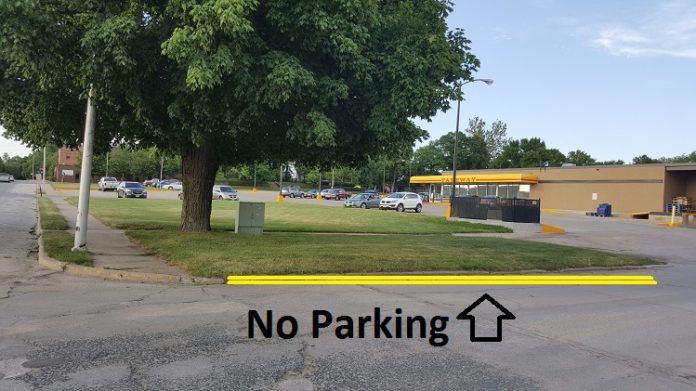 The Perry City Council approved the first reading Monday of an amendment to the city’s parking ordinances that would eliminate two parking spaces on the north side of Otley Avenue just east of Third Street.

According to the summary background memo that accompanies the council’s agenda, the city administration was recently “approached about the vehicular safety along Otley Avenue near Fareway when the store is receiving inventory delivered by delivery trucks, including semis.”

Representatives from the popular local grocery store “recommended that no parking should be allowed on the north side of Otley Avenue between Third Street and the entrance to the parking lot of Fareway to allow adequate space for deliveries.”

During Monday’s night’s regular meeting of the city council, a resolution was moved and seconded to approve the first reading of the amended ordinance, and a brief discussion ensued.

Perry City Administrator Sven Peterson explained the rationale for the change, also noting if the council approved the first reading, it could suspend its rules and immediately proceed to the second and third readings of the amended ordinance.

“There’s probably enough room for two or three cars right by that corner,” Peterson said. “Oftentimes they park close to the corner, and it creates line-of-sight issues. Then backing a truck up into their loading dock, that creates an issue as well, so (Fareway) requested no parking.”

Perry City Council member Dean Berkland noted the parking spots are situated near the Otley Apartments at 1305 Otley Ave. — the former Jones Business College building — and he asked whether the loss of parking at the corner would create a hardship for residents with limited mobility.

“That’s an apartment building right there, and some of those people have trouble walking,” Berkland said. “I’ve seen a few of them hobbling there. And now they can’t park in front of that apartment?”

Other members assured Berkland of ample parking in the vicinity, both on the south side of Otley Avenue and in the rear of the Otley Apartments.

“But it does create some real line-of-sight trouble,” said Perry City Council member Barb Wolling. “When you’re trying to cross Otley, you can’t see. You have to almost pull halfway into the intersection before you can see around them.”

“Was the owner of the apartment building made aware that this was being proposed?” said City Councilor John Andorf.

Peterson said the apartment owner was not notified. Presumably the tenants of the apartment house and other nearby residents have not been notified either.

“I’m actually surprised he isn’t here,” said Perry Mayor Jay Pattee, speaking of the Otley Apartments landlord. “I know that there have been past issues regarding parking in that area, and he usually shows up at the meetings.”

Berkland asked whether the curbs would be painted yellow to indicate prohibited parking.

“No,” Peterson said, “we’ll just put up No Parking signs.”

After further discussion, the council approved the first reading of the amended ordinance but postponed further readings until its June 30 meeting, directing Peterson in the meantime to inform the owner of the Otley Apartments of the impending change in parking.

The next meeting of the Perry City Council is June 30 at 8 a.m. in the Clarion Room of the Security Bank Building at 1102 Willis Ave.

You can help to guarantee ThePerryNews.com’s prompt and thorough coverage of local government by becoming a recurring donor at a mere $5 per month.