Dallas County’s ever-growing need for jail space has not gone away, and neither has the Dallas County Board of Supervisors’ sworn duty to bring the matter repeatedly before the voters, who alone can approve the sale of bonds needed to pay for a new law enforcement center.

County voters have rejected three jail bond referendums since 2013, but they will get another chance to express their will next year — in a March or May special election –when they face the same old question.

The only difference will be the price tag for the new law enforcement center, now grown to $21.3 million, according to projections presented recently to the Dallas County Board of Supervisors by the Samuels Group, a Des Moines-based consulting firm.

As the supervisors point out, the conditions making a larger jail necessary have not changed and very likely will not change. The population of Dallas County is now about 80,000. It has basically tripled since 1990, and population projections by the U.S. Census Bureau predict the number will double again in the next 25 years, rising to almost 160,000 people by 2040.

The current jail was built in 1988, when the county’s population was 30,000. It is not adequate to serve a population of 80,000 and will certainly not serve twice that many. So the question, according to the supervisors, is not whether to build a new jail but when to build it, and the longer voters put off the inevitable, the higher the cost of eventual construction. 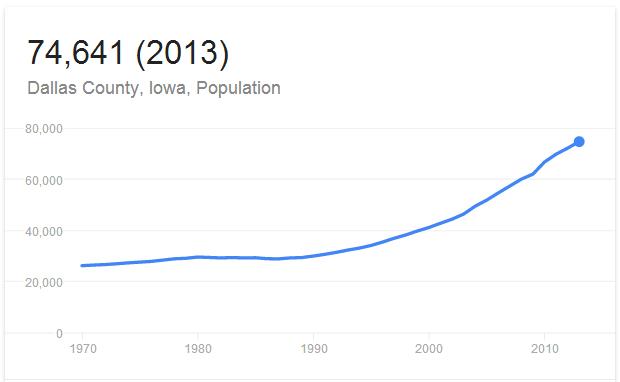 The supervisors can inform their constituents of these facts. They can educate, but they cannot use public funds for the outright advocacy of voter approval of the next jail bond referendum. Instead, a citizens’ committee of jail bond supporters has formed and intends to devote at least six months to vigorously encouraging the public to pass the measure and build the new jail.

The “Vote Yes” committee, whose representatives declined to be interviewed for this story, is presumably composed of private people and supported by private funding sources. According to Board of Supervisors Chair Mark Hanson, “At some future date, the citizens’ committee will be coming to us with a recommendation.”

In the meantime, the supervisors and the citizens’ committee have the report of the Samuels Group to digest. The group was tasked, Hanson said, with calculating “what it would cost to do nothing and what it would cost to propose the right facility to meet our current and future needs.”

For their early-August briefing to the board, the Samuels Group crunched the numbers and offered the supervisors — and voters — a new way to look at the jail question. Sid Samuels, president of the Samuels Group, concluded that by the year 2020, the cost to Dallas County taxpayers to export their prisoners to other counties will exceed the cost of building a new jail.

“Where the lines intersect is your break-even point,” Samuels said. “From the day when we start to see that red line escalate further up the chart versus the blue, that’s additional funds that we taxpayers are paying for Dallas inmates to be transported elsewhere. To me this is an important chart and an important demonstration as to why you want to consider constructing a new facility.”

In order to make their calculations, the Samuels Group used the basic design for the law enforcement facility as proposed in 2015 — minus Dallas County EMS and the Dallas County Emergency Operations Center, now housed at the Human Services campus north of Adel. They also calculated the future cost of doing nothing by projecting current operational costs and county population numbers 25 years forward.

At $21.3 million, the current design — a 92-bed facility, expandable to 172 beds — was planned for a 25-year life cycle, but Samuels also offered another projection for the board’s consideration.

“When we start talking about incarceration rates across the state and what’s happening here in Dallas County, we feel that the $21.3 million is going to last you for a period of time,” Samuels said, “but by 2027 we think you’re going to outgrow the facility that’s currently designed, and you would be required to add an additional pod.”

Samuels said a second pod of jail cells would add about $14 million to the project’s cost but would serve to satisfy the county’s projected needs for 25 years.

“For the cost of that additional bed in today’s dollars, I would put the additional beds in,” Samuels said. “I would spend the money today to increase that bed count because you will never buy those beds at a more economical time. You can see how quickly it’s going to ramp up, so why wait five years and spend more money on it when you can do it during the construction time period?”

The recent history of Dallas County jail bond referendums can perhaps be summarized by a line from the writer Samuel Becket: “Ever tried. Ever failed. No matter. Try again. Fail again. Fail better.” The election failures have been getting better each time.

In the first jail bond referendum, a special election held in August 2013, county voters decisively rejected a $16.8 million plan for a combination of public-safety facility and county administrative offices in the Ortonville area east of Adel. Only 32 percent of voters approved the measure, far short of the 60 percent needed for passage of a bond referendum.

Some city leaders in Adel were particularly opposed to the 2013 project because it removed county offices from the vicinity courthouse square, a move they believed would be fatal to downtown retailers.

The Adel folks were happier when the supervisors returned in the general election of November 2014 with a $23.6 million plan that split the project in two, again placing the new law-enforcement center in Ortonville but with the new county offices now located on U.S. Highway 6 just west of the Raccoon River.

Once again, however, county voters said, “No,” rejecting both measures but giving the jail a 51 percent approval and the administrative offices 46 percent approval. The plan failed, but it seemed to “fail better.”

With the completed conversion of the former Dallas County Care Facility into administrative offices, the pressure for more room to house county workers was reduced, but the need for a larger jail was larger than ever. An August 2015 special election put the jail matter before the people in its third form — a $16.8 million plan for a stand-alone law enforcement center in Ortonville.

It was voted down, but the “Yes” vote was 53 percent, which some supervisors took as an encouraging sign that voters are slowly coming around to accepting the inevitable. With the planned 2017 ballot measure, the additional 18 months of doing nothing will cost taxpayers an additional $4.5 million.

The referendum language on the 2017 ballot will probably be along these lines:

“Shall the County of Dallas, State of Iowa, issue its General Obligation Bonds in an amount not exceeding the amount of $21,300,000 for the purpose of designing, constructing, erecting, equipping and furnishing a new Sheriff’s Office-Law Enforcement Center, with related site improvements?”

The supervisors have contingency plans in the works for whichever way the voters decide. They accepted a $521,000 bid in early August from Johnston-based Brocon Services for the remodeling 902 Court St. Brocon’s was the lowest of eight general-contractor bids received for the work and came in well under the engineer’s original estimate of $630,000. The remodeled offices will permit a number of departments to occupy the former Community Services Department.

If voters approve selling the bonds to build a new law enforcement center, the old jail will possibly be used as a courtroom for the Fifth Judicial District. Jerry Purdy, the county’s architectural adviser, has drawn up provisional repurposing plans for the jail in anticipation of a yes vote. The growth of the county’s population makes an additional district court judge and courtroom necessary, according to Iowa Code.

Keep up with county goings on with a $5-per-month donation to ThePerryNews.com. To get started, simply click the Paypal link below.