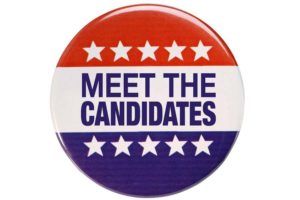 The standing-room-only crowd of about 100 people submitted written questions in advance, and the candidates’ answers were then moderated by two former Dallas Center mayors, Daniel Willrich and Mitch Hambleton.

“Reprehensible” was the word mayoral candidate Julie Becker used to describe the budget unanimously approved by the Dallas Center City Council in March, which included collecting $180,000 more in property taxes in the current fiscal year than in the previous fiscal year, a dollar increase of 20 percent.

“Lack of government transparency allowed this egregious taxing to occur,” Becker said in her question-and-answer face off against incumbent Mayor Michael Kidd. “I will oppose any such future taxing, and I will champion greater transparency in our local government.”

Becker said she was “very opposed to this 20 percent increase in our property taxes this year.”

“I do not want to burden taxpayers with tax increases because of unnecessary spending or burden future generations with our debt,” said Haxton, whose campaign styles him “the Taxpayer’s Friend.” Haxton said he advocates “a higher level of local government transparency in discussing and passing tax increases.”

For the sake of general understanding, it was pointed out that three factors determine a city dweller’s property tax bill in Dallas County: The county assessor’s assessed valuation of a property, the state’s residential property rollback rate and the city’s levy rate. No city controls the first two factors, but all control the third.

Dallas Center City Clerk and Treasurer Cindy Riesselman said Dallas Center’s levy rates decreased for all funds in the current year except for the general fund, which saw an increase of $1.89 to a total of $13.68 per $1,000 of property valuation.

The incumbent mayor and council members responded uniformly to their opponents’ anti-tax outrage. They said the bump in the city’s general fund tax rate was needed to service the debt on the $3 million stormwater improvement project.

None of the candidates at the forum spoke directly against the new stormwater infrastructure upgrades, and all appeared to be unanimous in agreeing the improvements were necessary and long overdue.

Becker said the city needs “to be focusing all our efforts on our infrastructures right now” and while Haxton said he would “defer unnecessary expenditures,” he did not claim the stormwater project was unnecessary.

“We talked to a lady who has been waiting 23 years for that project,” Kidd said, “and she’s seeing results of it right now. And she understood that she was going to have to pay a little bit more in taxes — we all did — to take care of those kinds of projects.”

It was not the new sewer itself but the pain in the pocketbook when paying for it that Becker and Haxton objected to and also to the secretive ways, in their view, by which the council passed the painful property tax hike.

“If elected mayor,” Becker said, “I will return the mayor’s compensation increase to the city coffers to be used in creating greater transparency in our local government so that the city of Dallas Center will never again be surprised by a 20 percent property tax increase.”

Mayor Kidd was seen shaking his head in disagreement when Becker claimed the city council meets more frequently in special meetings than regular meetings. Council member Pion addressed the charge of secrecy or lack of transparency in city business.

“I would love to figure out a way to live stream or record all of our meetings,” Pion said, “but to say that we’re not transparent, that we don’t do the city’s work publicly, that our staff are hiding behind a wall, I just don’t agree with any of it.”

He said low public interest in the council’s ordinary actions could possibly be corrected by better communication from the city.

Pion noted all public meetings and hearings are announced publicly in advance at city hall and on the city’s website.

Forward planning for the city’s future annexation to the southeast is also on the council’s radar, Kidd said, and residential and commercial tax abatement schemes will be thoroughly and publicly aired. These appeared to be less burning issues for Dallas Center than for its neighbor to the south.

“I’m here to run for Dallas Center, not against anyone,” council member Bagby told the audience in his closing comments. “My views are not important. It’s your views that are important, and that’s who I’ll listen to. Granted, we may not always agree, but it’s you that we need to listen to. Sometimes you’ve got to take yourself out of the equation. It’s not about what you’re feeling, but it’s what’s best for the community.”