“Those who committed this heinous crime are cowards and thugs!” Julie Becker of 1605 Walnut St. said on her Facebook page Thursday. “The bodies were left in front of my home to make a threatening statement by the cowards who would perpetrate such a crime. The authorities were called, a report was taken and names of possible suspects were provided.”

Becker moved to Dallas Center in 2012 and has earned a local reputation for herself as a gadfly around the town of about 1,700 souls, holding the city hall staff’s feet to the fire and making herself a burr under the saddle of city leaders and business owners.

She pushed to the front of the “Save Mound Park” movement in 2015. She ran unsuccessful campaigns for city council in 2016 and for mayor in 2017. She filed complaints with the Iowa Public Information Board (IPIB) in February 2018 and in July 2020, claiming the city of Dallas Center was restricting access to public records and overcharging for copies. Both cases were dismissed by the IPIB.

Becker’s vocal support for President Donald Trump and vigorous opposition to the Black Lives Matter movement are not unique among Dallas Center residents, but her activism has apparently earned her some skunk-hating enemies.

“I have little doubt,” Becker said, “that this intimidation tactic was utilized by those associated with ‘the good people’ of our city government and the ‘virtue signaling BLM Movement in Dallas Center’ because I dare to post on this Facebook page and speak out at public meetings on city issues. This was no prank or joke and certainly not funny to anyone but the thugs involved.”

Her indignation was plain in September and again in November, when Becker called out first a local coffeehouse and then the present mayor and a former mayor for yard signs that seemed too “progressive” for Becker’s taste. Their sign read: “We believe black lives matter. No human is illegal. Love is love. Women’s rights are human rights. Science is real. Water is life. Injustice anywhere is a threat to justice everywhere.”

Becker made clear she will vote with her dollars and put her treasure where her heart is.

“Do they think conservatives and Christians in Dallas Center will sellout for a cup of coffee? the NFL? Netflix? Not me! I am voting for Trump! I want to keep America great! If a business chooses to make their business political, I will only patronize those with values I support. I do not support the evil BLM movement. You would have thought selling coffee was a business that didn’t have to be ‘political,’ especially in Dallas Center. Once you have made it political, it is pretty hard to put that genie back in the bottle. What do you think the chances are of anyone in our city government supporting Trump? the police? conservative values? If you voted for Trump you have almost no representation in the Dallas Center city government! You have pretty much been ‘blacklisted.’ Time to make voting changes! It is time for Dallas Center to stop being ‘Quietly Progressive’!” 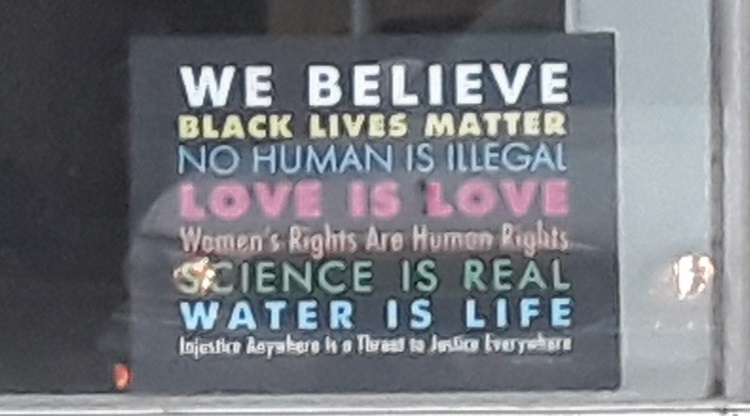