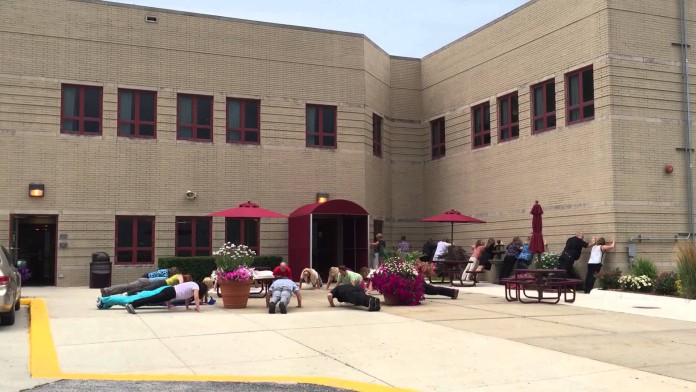 The Dallas County Hospital (DCH) in Perry has been challenged by the Iowa Hospital Association in a new contest similar to last summer’s Ice Bucket Challenge.

“This is an initiative started by American Corporate Partners,” Hornsby said. “The challenge is simple, much like last summer’s Ice Bucket Challenge which had people dumping buckets of ice water on themselves to raise awareness and funds for ALS (amyotrophic lateral sclerosis), also known as Lou Gehrig’s Disease.”

Anyone who has served in the U.S. military knows the order, “Drop and give me 20.”

“The order is usually given by a commanding officer as a form of discipline but in the #GiveMe20 social media campaign, it’s taking on a new meaning as a visible sign of support for veterans,” Hornsby said.

After doing their 20 push-ups, DCH employees and staff will post their accomplishments and then urge other individuals and companies to do the same.

DCH will meet the Iowa Hospital Association challenge on Tuesday,  July 21 at 2:30 p.m., when they gather in the green space around the Gazebo in the DCH north parking lot and drop and give 20.

“We will then challenge others in the community, too,” said Hornsby.