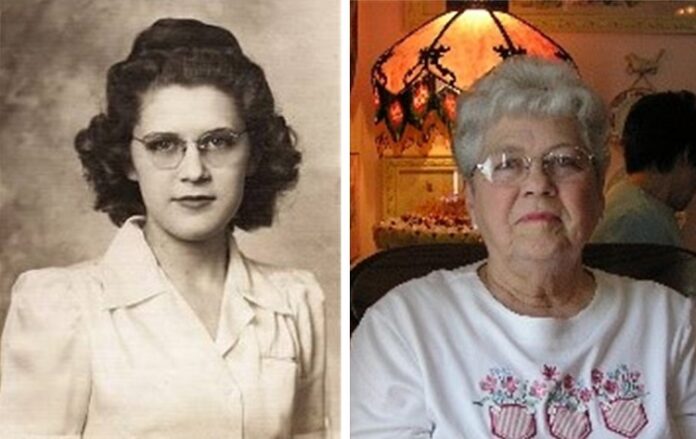 Darlene M. Heaton, 96, of Arlington, Texas, and formerly of Perry died Friday, May 13, 2022, at the Satori Senior Care in Arlington.

Darlene was born March 31, 1926, on the Wilson farm near Mount Auburn, Iowa, to George and Charlotte Wilson.

Darlene spent numerous years babysitting a number of youngsters in Perry in the 1960s and early 70s, and she worked as a saleswomen for Spurgeon’s Department Store in downtown Perry in the 1970s.

A graduate of Vinton High School, Darlene married Howard C. Heaton in May 1944. Howard and Darlene celebrated their 77th anniversary together in 2021.

After Howard’s death, Darlene relocated to Satori Care in Arlington, where she spent her last 7.5 months with Marcia and Jerry, visiting the botanical gardens in Fort Worth, enjoying many trips to KFC for her favorite food, fried chicken, and ice cream cones at Braum’s Ice Cream and enjoying visits from her grandchildren and great-grandchildren.

Darlene was a loving wife to Howard, who preceded her in death at 96 years of age in August 2021; father, George, and her mother, Charlette Wilson; along with stepmother, Harriet Wilson; and two infant sons. Darlene has seven sisters: Susie Hansen and Dona Dales, who are still living, and Evelyn Fleming, Georgia Thompson, Dorothy Nelson McNamee, Mary McCall and Marion Madorin, who are deceased.

She is survived by her son, Gary Howard Heaton, and wife, Monica, of Havelock, N.C.; her daughter, Marcia Marie Uhlman, and husband, Jerry, of Arlington: four grandchildren, Margeaux Ljungberg of Juneau, Alaska, Meredith Bruhn of Havelock, Andrew Heaton of Havelock and Luke Uhlman of Arlington; six great-grandchildren; and numerous nieces and nephews.

A memorial service will be held at 1:30, Friday June 24 at the First United Methodist Church in Perry, with a reception following the service.

Private services will be held prior to the memorial service at the Veterans Memorial Cemetery in Van Meter, Iowa (I-80, Exit 113 South), where Howard and Darlene will be united.