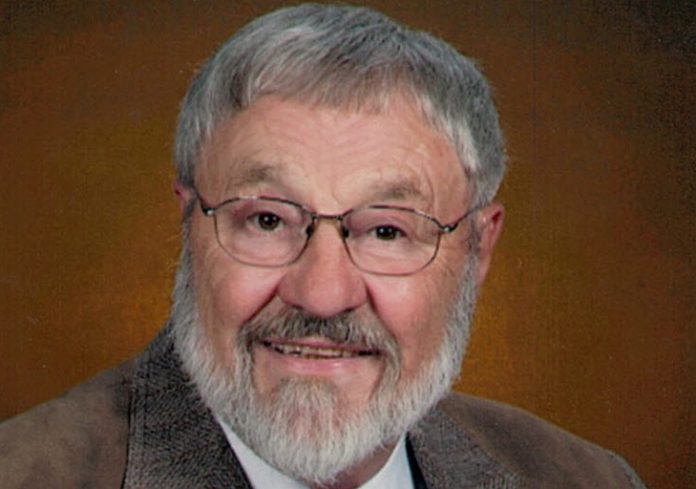 David Eugene Goodrich of Johnston and formerly of Perry was born in Sac City, Iowa, March 8, 1930.

During World War, II his parents, David H. and Opal (Barnhardt) Goodrich, moved to Sioux City, where his father was in the civil service with the air base.

There David attended school and upon his graduation from Central High School, during the Korean Conflict, he served in the U.S. Armed Services as a member of the paratroops.

After his completion of military service, he attended Morningside College in Sioux City and graduated with a B.A. degree in business administration.

On Dec. 29, 1956, he was united in marriage to Rita Jane Castle in Sioux City at the Cathedral of Epiphany Catholic Church.

David then began his business career with the Goodyear Tire and Rubber Co. While under their employment, he held several sales positions, culminating his 18 years of employment with Goodyear as a territory manager in Carroll.

In December 1969 he extended his business career as co-owner, with his wife, Rita, of McAtee Tire and Service Inc. in Perry. Later the name was changed to Perry Tire and Service.

During his first year of business in Perry, David collaborated with the Goodyear Tire and Rubber Co. in helping them produce a training film for employees. This film was used as a training tool in all Goodyear district conferences in the U.S. The film used the expertise of David, his story, operation and area farmers to emphasize the Midwest farmers’ specialized tire problems, needs and service.

In 1972 David was elected by his peers to represent the Independent Tire Dealers of the Midwest Region at a conference held by the Goodyear Tire and Rubber Co. in Dallas, Texas.

In 1975 David helped to organize and establish the Independent Iowa Tire Dealers Association. He served as a charter member of the board of directors for a period of two years.

In 1978, he was elected president of the Iowa Tire Dealers Association at their annual convention, which was held in Des Moines in January.

He was preceded in death by his parents; and one brother, Ronald, of Dunes, S.D.

A graveside service will be held on Monday, May 9 at 1 p.m. in the new mausoleum at Calvary Cemetery in Sioux City.

Memorials may be made to Missionary Oblates of Mary Immaculate, 9480 North De Mazenod Drive, Belleville IL 62223-1160 or may be left at the Carris Family Funeral Home.