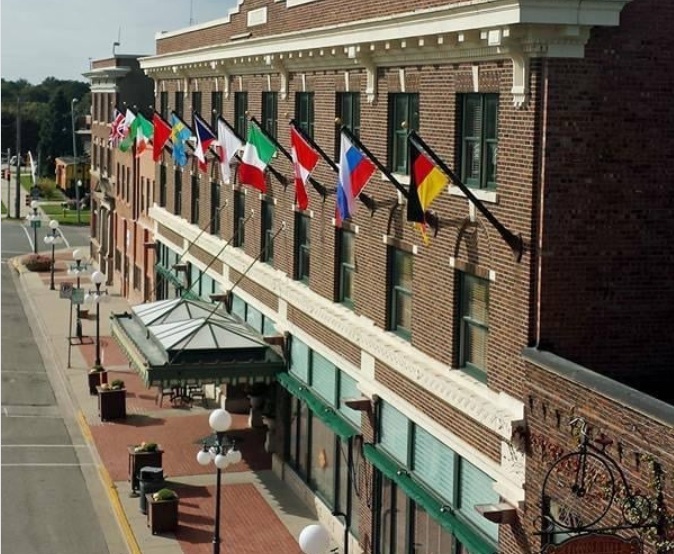 With the backing of the city of Perry, the Perry Economic Development Inc. (PEDI) group closed on its purchase of the Hotel Pattee and La Poste April 1 in an effort to ensure the stability and long-term sustainability of the hotel at the hub of Perry’s downtown historic and commercial district.

The public-private funding model for the purchase and operation of the two hospitality venues began with an initial contribution from the city of about $650,000, approved Feb. 1 by the Perry City Council, and a pledge of some $600,000 from PEDI and the Wiese Foundation.

A $500,000 donation in early March from Heather Bruce, president and CEO of Osmundson Manufacturing Co. in Perry, gave a huge boost to the $2.35 million campaign phase that is focused on raising additional funds through private donations. In about six weeks, the fundraising campaign has secured approximately $1.5 million in additional support beyond the city’s contribution, according to Perry Industries Inc. President Tom Burkgren.

“This generational purchase positions the Hotel Pattee and La Poste as locally owned and operated, solidifying the long-term viability of these critical community assets,” Burkgren said. “We will work diligently to complete the critical remaining fundraising with that same community over the next few months.”

He said the fundraising campaign will continue through June as the economic development group raises the remaining $850K needed to successfully achieve the overall funding goal for hotel operations.

Built in 1913, lavishly renovated in 1993 and reopened in 2013, the Hotel Pattee at 1112 Willis Ave. is central to the economic viability of Perry’s downtown historic and commercial district and is ideally situated at the trailheads of the High Trestle and Raccoon River Valley trails. For its part, La Poste at 1219 Warford St., for many years the Perry Post Office since its construction in 1915, complements the hotel’s suite of hospitality services, and together the attractions draw as many as 65,000 people to Perry annually.

Tom Maxwell of Maxwell Hospitality LLC, who bought the Hotel Pattee in March 2018 and La Poste in January 2019, began seeking to sell the properties in May 2020. When no private buyer was found, city leaders and PEDI members formed a committee in November in order to study the feasibility of acquiring the properties through a public-private partnership. Maxwell thanked his hard-working employees and the always-supportive Perry community for his many positive experiences since 2018.

“We truly enjoyed our three-year ownership of the historic boutique hotel in Perry,” Maxwell said in an April 6 statement. “We want to thank our employees, friends and guests and feel strongly the best is yet to come at the hotel. We were also blessed to own the beautiful La Poste, also in Perry. Both historic properties bring so many guests to Perry and the future is so bright. Again, thanks everyone.”

Burkgren said he was grateful for the overwhelming community support for the purchase and predicted prosperous times to continue for the Hotel Pattee and La Poste.

“We are so appreciative of the great partnership between the city of Perry and our business community to position these key properties as centerpieces of our community experience for years to come,” he said. “The generosity of so many in our community, along with the tireless efforts of the Perry Economic Development organization and committees, has been humbling to experience.”

PEDI will continue working to complete the capital campaign. Contributions can be made by contacting any PEDI board members or the city of Perry office or by emailing: fundraising@hotelpattee.com. Perry Economic Development Inc. is an Internal Revenue Code 501 (c) 3 organization Fed ID #42-1234767. Pledges/checks may be sent to Perry
Economic Development Inc., c/o P.O. Box 158, Perry, IA 50220.