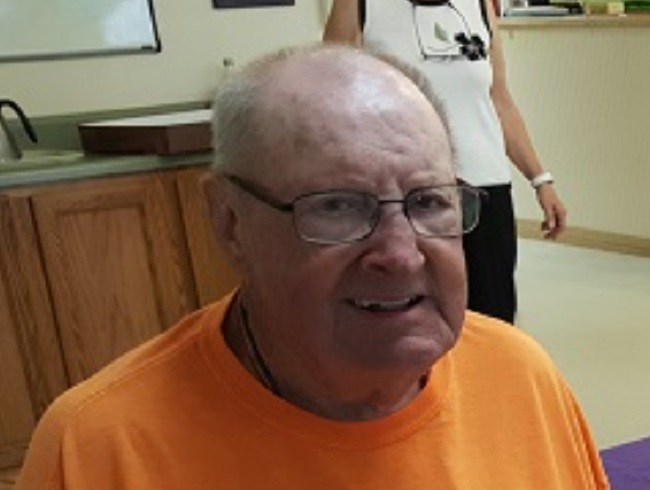 Donald “Pappy” Lewis, 97, of Perry and formerly of Woodward was called home early Thursday morning, March 18, 2021, surrounded by his care team who he thought of as family.

A Celebration of Life service for Pappy will be held Tuesday, March 23 from 1-3 p.m. at the Pearl Valley Rehabilitation and Nursing at 2625 Iowa St. in Perry. As a memorial for Pappy, the community is asked to form a parade in his honor and to drive by Pearl Valley and honk and wave March 23 between 1-3 p.m.

Pappy was born in Iowa Sept. 13, 1923, and was a resident of the Woodward State Hospital, now called the Woodward Resource Center. In September 2002, he and his buddy Jimmy Daughtery moved to Perry and made their home at the Perry Health Care Center, now called Pearl Valley Rehab and Nursing.

Pappy was a goodwill ambassador, and you could find him cleaning up the local highways for fun on his golf cart or bicycle with his track. He enjoyed sitting outside and honking at cars passing while blowing his whistles. One day someone asked. “Pappy, why do you sit out there?” He said, “I gotta make sure the kids get home safe from the bus stop.”

Pappy also enjoyed Wii bowling and was known to bowl a perfect 300 now and then. He enjoyed listening to Johnny Cash, drinking Pepsi and eating a Baby Ruth. You could also find him in many parades, and he was honored for his contribution to society.

He was a great friend and will be greatly missed by his family at Pearl Valley.