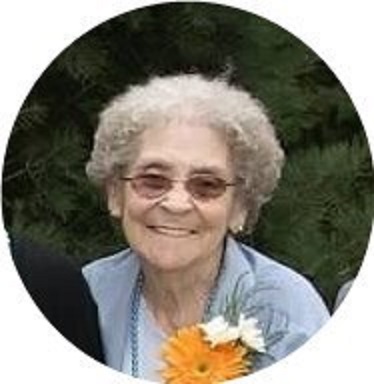 A service for Donna Faye Godwin was held 10 a.m. Tuesday, April 14 at Hastings Funeral Home in Perry. Visitation was after 1 p.m. Monday, with family present from 6-8 p.m. at the funeral home.

Soloist was Chaplain Kevin Vryhof. Pianist was Angela Abbas. Hymns chosen were “On The Wings of a Snow White Dove,” “In The Garden” and “How Great Thou Art.”

Interment took place at the Rippey Cemetery. Following the service at the cemetery was a luncheon at the Jamaica Community Center.

Donna Faye Godwin, daughter of Howard Harold John and Lucille Rita Kenan, was born June 2, 1935, in Berkley, Iowa. Donna grew up on a farm near Berkley and attended grade school in Beaver, Iowa. She graduated from Dayton High School in 1954. Donna fondly remembered being a member of the Beaver Blue Bells 4-H Club.

Donna was married to Roland Snowgren on August 14, 1954, in Fort Dodge. They were blessed with three children, Dennis, Dwight, and Connie. They lived on a farm north of Jamaica. Donna was always a hard worker and especially remembered raising chickens and enjoying gardening. Her family learned many valuable lessons about canning, baking and cooking.

Donna moved into Jamaica and later married Dale White in 1971. They owned the Jamaica Locker. She worked at Dallas County Hospital for a short period of time. After Dale’s death, she married Dick Godwin, and they enjoyed several years together until he died.

Donna enjoyed card playing in general but cherished her friends in the Yale Card Club, where they played Sunday night pitch at Just Ethel’s. Donna also enjoyed Word Search, and later she found a lot of joy using her iPad.

Donna endured much loss during her life, but she always remained kind and upbeat.

She was preceded in death by her parents; sister, Maxine; her husbands, Dale White and Dick Godwin; and her son Dwight Snowgren in a tragic traffic fatality.