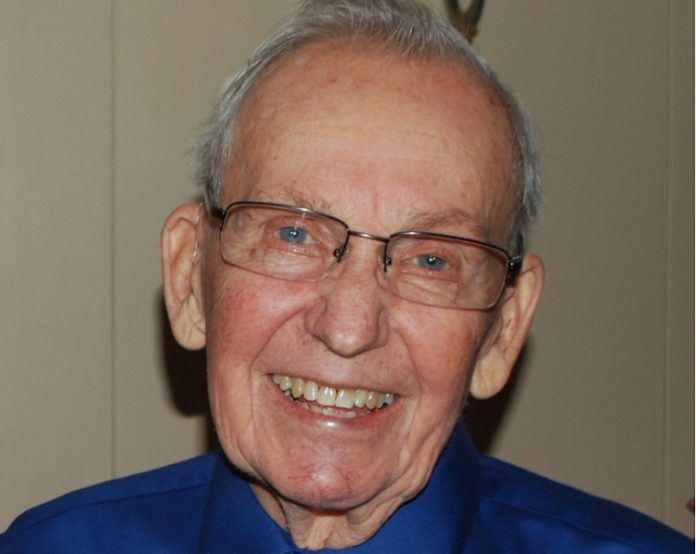 Earl Benjamin, 87, of Storm Lake and formerly of Perry passed away Saturday, Dec. 21, 2019, at the Methodist Manor Retirement Community in Storm Lake, Iowa.

Funeral services will be held Monday, Jan. 13 at 10:30 a.m. at the First Presbyterian Church in Perry. Visitation will be Sunday, Jan. 12 from 2-7 p.m., with family present to greet friends from 5-7 p.m. at the Carris Family Funeral Home and Cremation Care in Perry. Burial will be at the Iowa Veterans Cemetery in Adel, Iowa, Monday, Jan. 13 at 2 p.m.

Memorials will be given to the family for later designation and may be left at the funeral home. Online condolences may be sent at www.carrisfuneralhome.com.

He was reunited with his parents and countless friends Saturday, Dec. 21, 2019.

During his 87 years of life, Earl graduated from Laurel High School, joined the U.S. Navy, where he served in the Korean War on the aircraft carrier USS Bon Homme Richard, and was then united in marriage Jan. 1, 1956, to Doris Kathryn Puhrmann.

Earl and Doris raised a family together, ran a local business in Perry and were deeply involved in civic duties and the First Presbyterian Church. Earl and Doris would have celebrated their 64th wedding anniversary on Jan. 1.

Following his marriage to Doris, Earl worked for the Milwaukee Road before making a career in the office machines and office supplies business in Cherokee and Fort Dodge.

Earl and Doris relocated to Perry in 1972, where they owned and operated Perry Office Supply. They later were partners at the Idea Press, and their children could be found working in the downtown business until Earl and Doris sold and retired in 1999.

After retirement, Earl and Doris spent the next 20 years doing exactly what they loved to do: playing cards, golfing, bowling, fishing, gardening and traveling.

Above all, Earl was always eager to lend a hand at the church and anywhere else he could be of service.

Earl was known for his mischievous smile and making friends wherever he traveled and whatever he did. Earl and Doris traveled extensively, which included fishing in Canada, wintering in Arizona or Texas, cruising Hawaii and Alaska and visiting National Parks.

Earl enjoyed helping others and dedicated his life to his wife, family, numerous friends and serving the church and community. He was a member of the First Presbyterian Church in Perry, where he served as elder, trustee and deacon on multiple occasions.

He was also a member of the Perry Elks Lodge, American Legion, Rotary and Kiwanis Club where he often served in leadership roles.