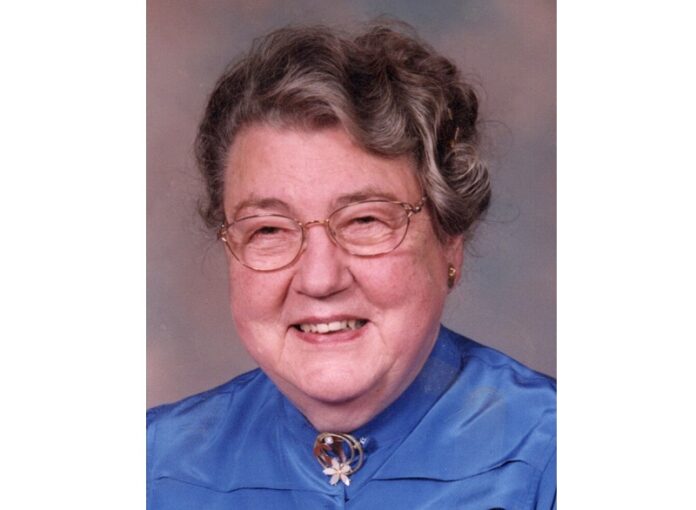 Eleanore Wojan, 96, of Perry passed away Saturday, Dec. 3, 2022, at the King’s Garden Campus of the Perry Lutheran Homes in Perry, Iowa.

Funeral services will be held Wednesday, Dec. 7 at 11 a.m. at the First United Methodist Church in Perry, with visitation beginning at 9:30 a.m. until the time of the service. Burial will be at the Violet Hill in Perry, Iowa.

Eleanore Wojan was born April 19, 1926, in Platteville, Wisconsin. She was the first child of Elwood and Gretta Parish. Following the death of her mother, Eleanore was adopted by Mable and Bert Dixon at the age of 4 years. Mable was the sister of Eleanore’s mother.

After two years of teaching in Port Washington, Wisconsin, she married Carl Wojan on July 28, 1951, and to this union was born a son, Randall Carl Wojan.

Eleanore taught in Antigo, Wisconsin, one year, and then four more years were spent moving with the railroad and mining companies. During this time, she was a substitute teacher in different schools.

She arrived in Perry with Carl and Randall in 1957. Here she taught six years at St. Patrick Catholic School and spent two years doing in graduate work in special education at Drake University and University of Northern Iowa.

Eleanore then taught for nine years at the Lincoln, Roosevelt and Dawson elementary school buildings.

Eleanor retired at 62 and enjoyed retirement with Carl until his death in 1990. Eleanore continued to live on Evergreen Hill.

She was blessed with one grandson, Frank, at the age of 68 years. His parents, Randall and Fran, shared their son in the summers with Grandmother Ellie.

Eleanore was a member of the First United Methodist Church. Her husband, Carl, said it was her second home. Over the years, she taught Sunday School from preschool to adult.

She was a member of the U.M.W. President for two years and circle chairman. She worked with Bible School and Ecumenical Children After School Club (CCF). After Carl died, she taught Saturday Sunday School at the nursing homes and Bible Study at another.

Eleanore was well known for 31 year as “The Good Witch of the Hill.” She entertained children in Scouts and nursing homes. Eleanor and Carl shared Evergreen Hill with school children, making cider, rail splitting and much more.

Eleanore loved the children of Perry, her church family and her friends.

She was preceded in death by her parents; and a brother and sister; and her husband, Carl.

She will be missed by her son and his wife, Randall and Fran; grandson, Frank; eight nieces and nephews; and many friends.

Memorials will be given to First United Methodist Church, St. Patrick Catholic School or the donor’s choice and may be left at the Carris Family Funeral Home and Cremation Care. Online condolences may be left at www.carrisfuneralhome.com.