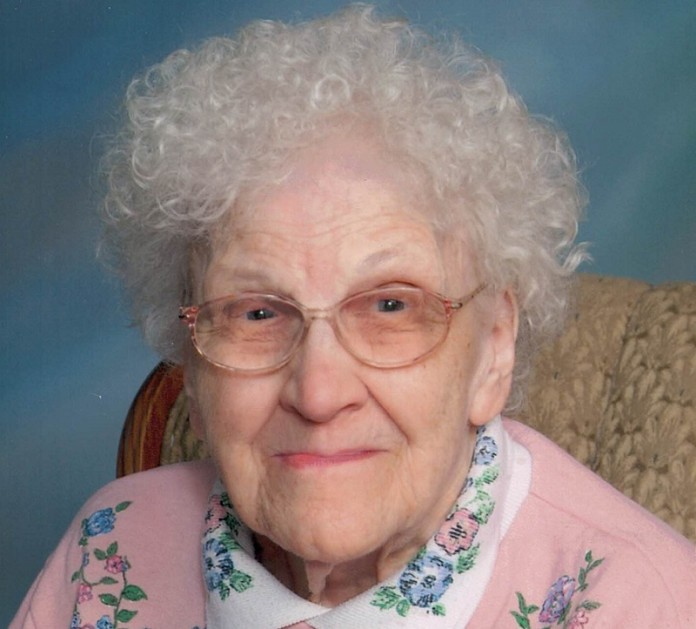 Funeral services will be held Tuesday, Jan. 5 at 10 a.m. at the Rowley Masonic Community in Perry, with visitation with beginning at 9 a.m. until the time of the service. Burial will be in the Evergreen Cemetery at Britt, Iowa. Memorials will be given to Rowley Masonic Community and may be left at the Carris Family Funeral Home. Online condolences may be sent at www.carrisfuneralhome.com.

Her father was a baker, and Esther worked with him in various bakeries in northeast Iowa until the family eventually moved to Britt, where she worked in the bakery at Brooks Super Market.

They moved to Sioux City, where Pete was employed at Strauss Key Company.

Esther returned to Britt to live with her parents during World War II, while Pete was in Europe serving in the U.S. Army Air Corps.

After the war they returned to Sioux City, where Esther was primarily a housewife but did work occasionally as a waitress at the White Spot Cafe in downtown Sioux City.

Pete and Esther had no children, but Gordon Klatt, a nephew, lived with them for many years.

Esther was a very active member of Bethany Lutheran Church and the Sioux City Gladiolus Society. Esther was also a member of The Girls of 68.

After Pete died in 1986, Esther continued to make her home in Sioux City until early 2007, when she moved to the Rowley Memorial Community in Perry to be near Gordon and his family.

Esther was preceded in death by her husband; her parents; a sister, Erna Konkel; and her brothers, Harold Klatt and Elmer Klatt.

She is survived by nephew, Gordon (Marti) Klatt of Adel, and their sons, Charles of Moline, Ill., and David of Burlington, Iowa; nephew, John Klatt of Des Moines; nieces, Lois Klatt of Chicago and Marilyn Duryee of Plainfield, Iowa; and many other great- and great-great-grand nephews and nieces.