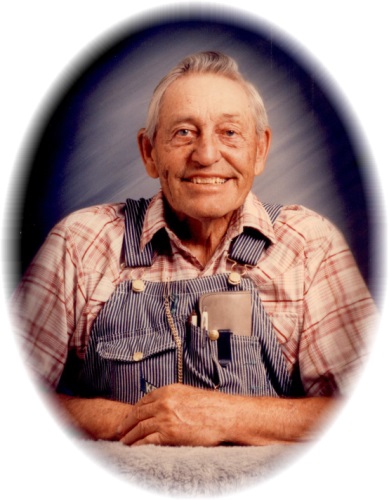 Everett Earl Derry was born June 7, 1916, in the Greene County Township of Greenbrier to Marshall and Mary Derry. He died Nov. 18, 2015, at his home in Bayard. Everett was 99 years old.

Organist was Lula Garnes. Soloist were Randy Andrews, Zach Svoboda and Brian Riesberg. “The Old Rugged Cross,” “Amazing Grace” and “My Chains Are Gone” were hymns selected by the family. Interment was held at Highland Township Cemetery in Bayard.

The couple lived on his father’s farm for a year before moving to a farm at the Cooper corner, where they lived for three years. In 1945 they moved to their farm near Bayard. Everett and June moved into Bayard in 1980, but he continued to farm until his death.

Everett enjoyed watching football, baseball and basketball, and in later years his television set made that possible. He loved his family and made an effort to watch their sports and activities.

Everett was a member of the Bayard Church of Christ.