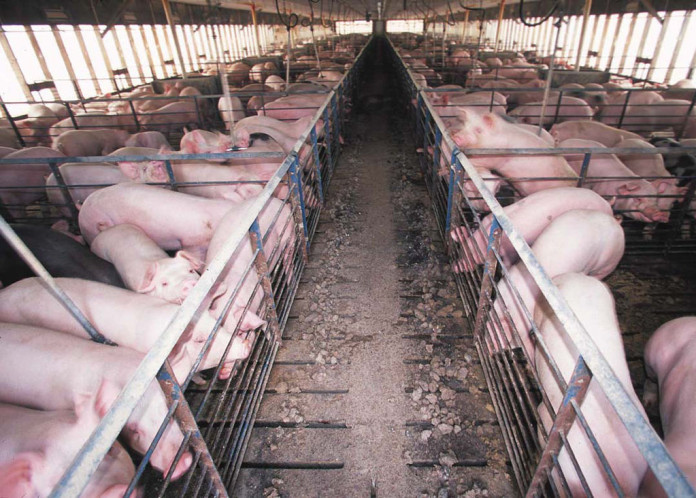 An agreement reached among the Greene County Supervisors last week — that farming practices have changed since the master matrix was implemented in 2002 and that it is time to review it — has drawn the ire of the Greene County Farm Bureau board.

Several Farm Bureau board members attended the March 4 supervisors meeting to discourage the board from approving a resolution calling on the Iowa legislature to review the matrix.

Greene County Board of Supervisors Chair John Muir opened the discussion during the open forum portion of the meeting, noting who was present and correctly assuming they were there to discuss a letter to the Iowa DNR.

Muir asked county environmental health and zoning director Chuck Wenthold to read the resolution he drafted for the supervisors. The resolution is very similar to resolutions approved by 19 other counties in asking for a review of the master matrix.

Wenthold’s draft noted that “CAFOs in Iowa have proliferated at a rate and number likely not anticipated by the authors of the 2002 matrix,” and the master matrix “has failed to adequately differentiate between the geography, water resources and other critical considerations through different regions of the state of Iowa.”

The resolution also said that the “failure to take into consideration information within the knowledge of local sources has highlighted the failings of the master matrix to protect the air, water, health, quality of life and economic interests of all the citizens.”

Dale Hanaman is the de facto spokesperson for Greene County residents who want to see the master matrix reviewed. He was also at the meeting, prepared with two different resolutions — one very similar to Wenthold’s and the other with an additional request for a moratorium on granting new construction permits for CAFOs while the matrix is under review.

Hanaman did not push for a moratorium after Muir said a review was what the supervisors were comfortable asking for and not a moratorium.

The discussion of the master matrix was sparked by an application for a construction permit for a 4,999-head CAFO in Greene County by Roy Bardole, his sons Tim and Peter Bardole, and his grandson Schyler Bardole. Peter Bardole is on the board of supervisors.

Peter Bardole said at the March meeting he did not like the wording in the resolution and does not think the master matrix has failed.

“There are places I see in the master matrix with its age,” Bardole said, “that there’s a lot of new technology to be included but having gone through it, I think the only people for whom it’s a failure are the ones who want a moratorium.”

Muir agreed with Bardole in rejecting the notion the matrix is a failure.

“It hasn’t failed anybody because of the public hearings that are involved,” Muir said. “It’s a harsh statement to say it has failed. I don’t think this board will send a letter that asks for a moratorium.”

Farm Bureau Board member Perry Parker said the discomfort with opening any discussion of reforming or updating the master matrix is that it could result in more regulations, such as regulating a child with a 4-H calf or a couple of chickens.

The Farm Bureau letter said asking the legislature to ammend the master matrix “serves only to disparage your livestock-farming constituents.” The letter said farmers “do not deserve to have their elected county supervisors join in with livestock opponents who are engaging in an out-of-state-funded war against modern livestock farmers through bullying and badgering.”

The letter stated the mutual importance of livestock and grain farmers to one another and noted that one in five jobs in Iowa depends on agriculture.

“We agree that growth must be done responsibly,” the Greene County Farm Bureau letter said, “so we encourage farmers to work with groups such as the Coalition to Support Iowa’s Farmers. Working together creates a win-win for everyone. Finger-pointing and endorsing activist-drafted letters does not.”

Hanaman responded, saying that any time people petition the supervisors one way or another, “it’s an activist letter. It’s not just people who would think my way. It’s also the Farm Bureau. Any time we petition you, we’re becoming active in politics. It’s good. It’s a way in which we add our voice.”

Hanaman asked if there is a limit to the number of CAFOs that would be allowed in the county. He said the age of the matrix makes looking at it a “wise” thing to do.

“It’s going to be a complicated process,” he said, “but asking the question that it be looked at is not to say we do away with everything. It’s asking for it to be looked at.”

Muir mused over the question whether there is a limit to the amount of livestock a county could support. Farm Bureau board member James Holz answered that there is too much livestock “when there isn’t enough land for the manure” to be spread on.

Reviewing the matrix “would open doors that don’t need to be opened,” Holz added.

Nancy Hanaman, a cousin of Roy Bardole and the wife of Dale, suggested that “a consideration of revising it is not anti anything. To suggest that anyone who sees the master matrix needs to be revised is anti-agriculture, it’s simply untrue. We’re all in this together and we want people to live and grow and prosper in Greene County. We need to look carefully at what we’re saying and who we’re saying it about.”

Supervisor Rudolph was not at the March 4 meeting.

Victoria Riley is the editor andpublisher of the Greene County News Online.