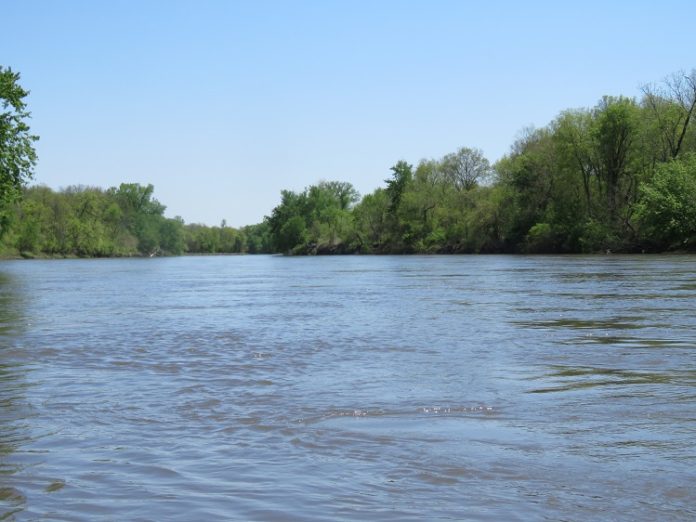 I’ve always liked fishing in the rain for several reasons, not the least of which is that the fish bite. But it can’t be just any rain. A slow and steady warm rain with no wind and no lightning is best. Fish won’t bite if there’s lightning, and besides I’m terrified of lightning. If you’ve forgotten what it’s like to wear a soiled diaper, try being 10 miles from the dock on Lake of the Woods when a lightning bolt comes out of nowhere to strike the island 50 yards to starboard. Sort of takes the fun out of fishing in the rain.

While fishing in the rain Saturday morning, it occurred to me that many other species seem not to mind a slow, steady rain. The blue jays still were taunting each other with their blue jay obscenities, and wood ducks seemed to be playing chicken with their dare-devil flying among the one million trees that have been planted in Johnson County’s Kent Park.

While trying to catch a meal’s worth of bluegills, I thought about how to work into an essay a presentation that I had heard the previous day by Dr. Kim Van Meter . She is an Iowa native — Gilbert — and an ecohydrology professor at the University of Illinois-Chicago. Kim has multiple degrees from the University of Iowa, including a BA in English, a MS in chemistry and PhD in engineering, and you can hear them all in her voice and her words.

Some of her recent work has looked at “legacy” nitrogen (N) in the Mississippi River Watershed. By legacy we mean N accumulated in the soils and groundwater of farmed landscapes. This accumulation is the result of A>B where A = manure and fertilizer N inputs, and B = N harvested in the grain.

The Van Meter work has shown that as much as 40 percent of the stream N in the Mississippi Basin is a result of farming activities and surplus nitrogen that was applied 20 or more years ago. This might be considered a bit of good news if we were reducing this surplus. There’s not much evidence, however, that we are doing that here in Iowa. In fact, when I look at statewide N budgets for Iowa, I think the surplus nitrogen is increasing.

Our main inputs of N are commercial fertilizer, hog manure and fixation by soybeans. Soybeans are a legume, and they “pull” nitrogen out of the atmosphere and “fix” it in the soil. This is why corn grown after soybeans needs less nitrogen than corn grown after corn. When I look at these inputs over the last 20 years, along with the amount of nitrogen harvested in the crop grain, it’s pretty clear that all are increasing, but the amount of input N is increasing faster than the amount of N leaving in the crop.

Under this circumstance, we would expect the amount of N leaving in our rivers to be increasing. This is, in fact, happening. See the graph of my data, and bear in mind this graph does not include beef, dairy or poultry manure but only hog manure.

What I am doing here with the graph is N Budgeting, that is, quantifying inputs on one side of the ledger and outputs on the other. I recall attending an Environmental Protection Commission (EPC) meeting about 10 or 15 years ago and watching a DNR employee, who had recently created some statewide nutrient budgets, get aggressively challenged by an ag industry advocate on the work he had done. At the time, I found this somewhat curious.

Now I know these budgets are a threat. They open up the curtains on a little shop of horrors, mainly by eroding much of the industry rhetoric of the last 20 years on fertilization. Some of that has included catch phrases like “spooning it on,” “agronomic rates,” “manure is a resource” and insistence that rate reductions, that is, reducing the amount applied, will not improve water quality.

In my view, the industry has painted itself into a corner with its rhetoric. If indeed farmers are applying at agronomic rates, then we must be either:

a) losing a far larger percentage of the inputs to streams than what the industry wants to admit, or
b) mining soil fertility in destructive ways that could be of crisis proportions, or
c) both a) and b)

The other, more logical explanation here for our increasing stream nitrate is that we continue to apply nitrogen in amounts that are substantially larger than what is being harvested in the grain, and of course the industry is not exactly excited about admitting this either.

Thus the wet paint and the corner.

When I do a very basic linear regression of the data shown in the chart, these are the increases I get from 1999-2018:

That 55.1 percent number is what Kim Van Meter is telling us will be in our children’s and our grandchildren’s water 50 years from now. If she’s right, there’s not much hope in solving things in my lifetime, especially if there’s nothing to compel the industry to get its arms around this, and there isn’t. Now I know their rhetoric claims that it’s the soil or weather or point sources or golf courses that are the problem. That rhetoric is unserious.

The other thing at work here is that the industry wants to continue expansion of hog production. Well, okay. You can’t very well make a sincere argument that Iowa can absorb more hogs unless you’re going to reduce inputs of commercial nitrogen. That is not happening. People want to sell nitrogen.

Yes, N removed in the grain is increasing with improved crop yields, but it is not keeping up with the inputs, at least not in Iowa. Clearly, the industry’s goal when it comes to inputs is not perfection. Rather, their strategic goal is a consistent surplus of N on the landscape, and your water is the collateral damage.

Now we hear from time to time that Iowa has exciting momentum when it comes to water quality. But when I look at the N data, it sure appears the momentum lies with our efforts to squeeze every last bushel and hoof of productivity from the landscape. From an environmental perspective, those last few bushels are going to come with a heavy price in terms of water quality, if history is an indicator.

I don’t really like the phrase “factory farm” because nearly all farms have by necessity specialized and adopted certain methods of the industrial revolution. The phrase doesn’t really say much to me. On the other hand, I do believe Iowa is a “factory state.” Iowa is one giant photosynthesis factory, one that we keep fueled with a super-abundance of nitrogen and phosphorus and one that has very few limitations on what it can emit to the surrounding environment.

Can that factory be retooled to produce the environmental outcomes that we want? The industry would have us believe that it can, provided the taxpayer ponies up sufficient money and they are given sufficient time, usually on the order of decades or generations. Okay then. This is probably a billion-dollar-per-year problem, at least for a while, unless the system can be transformed to something different, something like Matt Liebman of Iowa State University has been proposing for a long while.

I will wander toward an end with a return to fishing, this on Sunday, again in the rain. This time for channel cat, a species that tolerates the worst in us. As I looked at a muddy Iowa River, I thought about Dr. Van Meter’s comment that rivers are “integrators.” In the disturbed and managed ecosystems of Iowa, these rivers are “us.” Do we like what we see? I don’t.

How do we change this? I read recently that change happens with push from the outside and leadership from the inside. We need a lot more of both.

Some notes on the data:

Commercial fertilizer amounts are derived from Iowa Department of Agriculture sales data and Gronberg and Spahr, 2012.

Dr. Christopher S. Jones is a research engineer in the IIHR—Hydroscience and Engineering at the University of Iowa. His research interests include water quality and agriculture, water monitoring and nutrient and sediment transport. This article is republished by permission from Jones’ website.