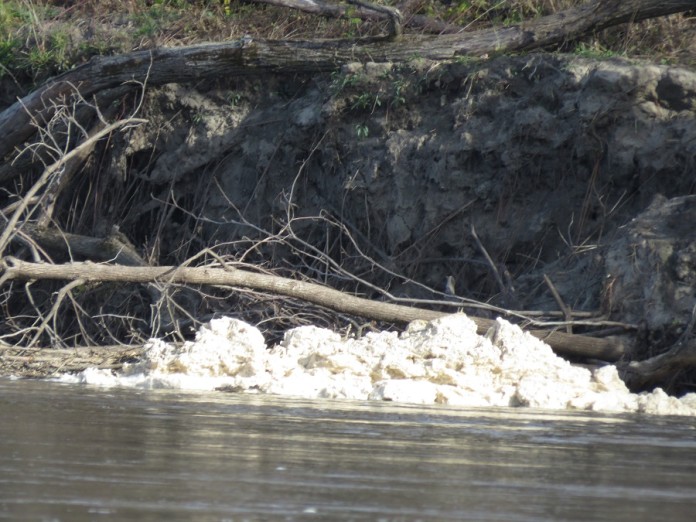 Ray Harden and I have been wanting to paddle on the Raccoon River the past few weeks. The river had finally cleared up after six months of top soil, nutrients, manure and algae flowing down the river past my farm in Dallas County.

We decided that we would float from Dawson to Perry to take a good look at Sportsman’s Park bluff. Hundreds of tons of bank have been sliding down into the river over the past few years due to increased surging of the Raccoon.

I have never seen hog manure foam so deep as it was on this trip.

“With all this bacteria-formed foam, there must be a lot of manure in the water,” Harden said. Organic fertilizer is a significant contributor to Iowa’s poor water quality but is not the only one, as the Des Moines Water Works explains in “What’s that foam on the river?”

It appears to me that the Iowa Nutrient Reduction Strategy is not being embraced by our friends up river. Buffers would help with this problem. When the price of corn was high, our farmers had to plow up conservation acres for the profits. Now that the price of corn is down, they have to plow every acre just to break even.

It seems that the only way to get cooperation from the “Industry Farmers” is pay them more than their crops are worth to plant something else. That would take billions, according to some estimates.

Whatever happened to stewardship?