Former Fed Chair Alan Greenspan once spoke of “froth” in the housing market, and the same term might be applied on a smaller scale to the tavern market in Dallas Center, where a popular bar is changing hands and a new one is cropping up.

The Longest Yard Sports Grill at 1405 Walnut St. is on the market, thanks to the birth of a son to owners Brian and Tiffany Filloon of West Des Moines.

“We’re not closing. We’re still here,” said Brian Filloon, “but we’re selling it because my wife just had a baby, and we have another store in Valley Junction.”

They have split their duties between the bars for several years, but the newborn has led to new arrangements, he said.

“Tiff was doing one store, and I was doing the other,” Filloon said. “Now with the little one and all that good stuff, we’re just downsizing a little bit. My wife told me to slow down a little, and I’ve been doing this for 25 years, so yeah, I think it’s time.”

The Filloons have had an eye out for several months and are “just trying to find the right buyer for it,” Filloon said. “I don’t have it listed at anything low by any means, so I’m not in any hurry to really get out of here. It would be an easy change over to the next person.”

There have been “several people interested,” said Filloon, who intends “to stick around and transition them and go the whole nine yards” — or maybe even the longest yard.

Woodsmall said earth work has been underway for about two months on the 2.3-acre Biker’s Haven North property, located in the 1600 block of Sugar Grove Avenue on Iowa Highway 44.

The lot already boasts a half-acre pond on the north end and a six-foot walking path around the pond. Woodsmall calls the pond a “significant feature” and “the only body of water within the city limits of Dallas Center besides the pool. It’s got the sitting rock and the walk path around it.”

Some of the building permits are still in the works, Woodsmall said. “I don’t think we’re too far away from getting that done. The weather in Iowa has limited the start of the process. The proposal came from MidAmerican Energy to bring the electrical and gas service there, and they said they’re about six weeks out, so I would guess we won’t be able to break ground (on the restaurant portion) for at least six weeks.” 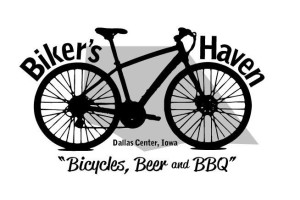 A fence — Woodsmall calls it a “lineal bike rack” — divides the property from the bike trail, he said, and his contractor is preparing the land in the southeast section of the property for a 74,000-square-foot parking lot.

Woodsmall said his successful effort to earn the approval from the Iowa Department of Transportation for approach to the parking lot was “a significant step in the progress of this project.”

Between the pond on the north side and the restaurant in the southwest section will stand a “four-seasons type shelter house,” he said, a 12-foot covered porch along the east side of the property that will give a view of the trail.

Once complete, Biker’s Haven North will be well placed to share with the Longest Yard the bike-trail dollars making the route of the Raccoon River valley Trail.