Commission member Larry Vodenik presented a plaque to Mary Soumas of Altoona on behalf of her father, George P. Soumas, one of Perry’s great benefactor.

Vodenik described highlights of Soumas’ life, from the heroics that earned him a Distinguished Service Award in World War II to his multiple terms as Perry mayor, his contributions to Perry Underwater Rescue modernization, his work to establish Iowa Highway 141 as a four-lane highway between Granger and Perry and his many years as an attorney and judge.

James R. Haas was presented a plaque by Perry Historic Preservation Commission Chairperson Gary Martin. Haas, a 1940 graduate of Perry High School, distinguished himself during World War II as a bombardier in the 398th Bomb Group of the U.S. Army Air Corps.

He has participated in the “Timeless Voices of Aviation” project as well as many Perry High School Veterans Day programs. Hass retired after 40 years as the senior vice president and trust officer at Perry State Bank and was a longtime supporter of Perry High School athletic and cultural programs.

Haas was joined at the ceremony by his son, Marty Haas, his daughter, Nancy Gilman, his grandson, Tim Gilman, and his daughter-in-law, Ronda Roberts. Roberts described Haas’ wartime heroism.

“We were once looking through some old photos, and I asked, ‘Weren’t you ever scared?’ and he answered, ‘Every minute of every day. I used to wake up in the morning and wonder whether I would be alive to go to bed that night.'”

From his seat in the front row, Haas, 93, the ceremony’s only non-posthumous honoree, said, “I was 22, and I didn’t want to die. There were all those pretty girls out there I still wanted to meet.” The Spring Valley crowd laughed heartily at the quip.

Clarence L. “Jack” Hawn was honored with a Perry Historic Preservation Commission plaque for his contributions to civic life as a second-generation filling station owner well known as a businessman of honesty and integrity. Commission member John Palmer presented the plaque to Hawn’s son Lyle and daughter, Sherry Hawn.

Hawn served the Perry community with service on the Perry City Council for several years and through promotion of the construction of the McCreary Community Building in 1983. He also had a passionate interest is supporting the athletic and cultural programs of Perry High School. 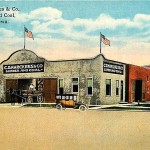 The Marckres brothers still own and operate Spring Valley Radio in Perry, a business founded by their father.

Perry man arrested on charges of sexual abuse from 2011