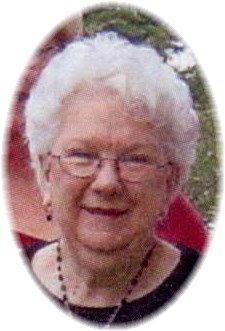 A service for Freeda D. James was held 10 a.m. Friday, April 3 at Hastings Funeral Home in Perry. Visitation was Thursday from 1-5 p.m. at the funeral home. Another visitation was held one hour prior to the service. Pastor Chris Tjapkes of the First Baptist Church in Perry provided words of comfort.

Recorded music selected was “Precious Memories” and “Will the Circle Be Unbroken?” Interment took place at Resthaven Cemetery in West Des Moines.

Freeda met Claude James in Mena, Ark., in October 1943, and they married in December.

In their early years, they moved several times, eventually settling in Chicago. Together they raised two children. Their daughter, Cindy, was born in 1950 and their son Denis in 1953. Claude retired in 1985 and upon Freeda’s retirement from Regular Baptist Press, Schaumburg, Ill., in 1990, they relocated to Perry.

While in Perry, their son Denis and his wife Jolene increased the family with a daughter and three sons. Denis’ eldest son also lived with them.

Freeda was a member of the First Baptist Church in Perry. She became a resident of the Perry Lutheran Home in 2012.