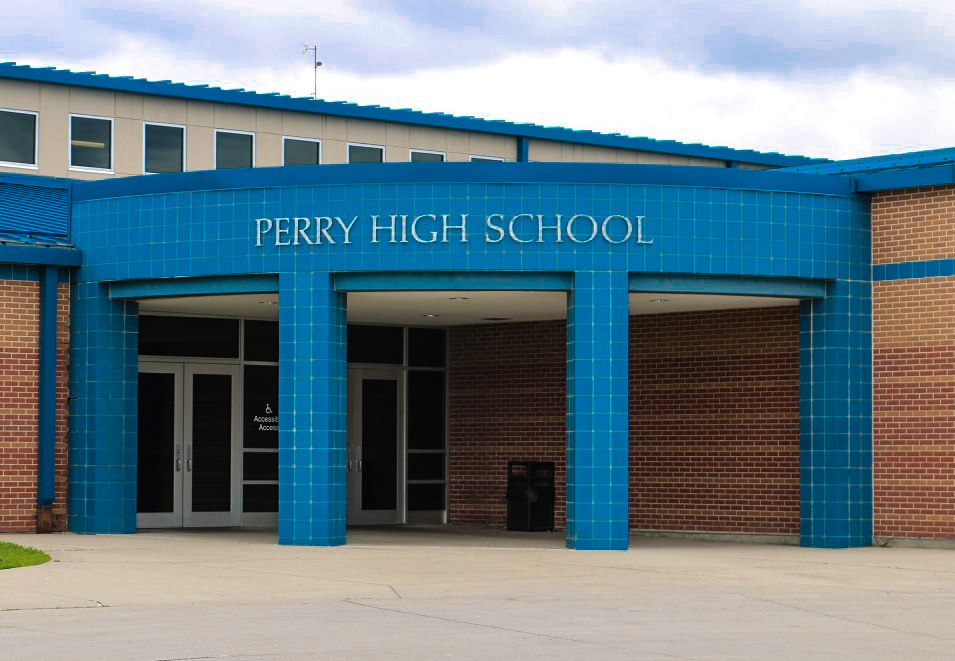 The new Gay-Straight Alliance club at Perry High School was just one of a number of agenda items receiving an official “go-ahead” at the June meeting of the PCSD Board of Education.

Teachers T. J. Maylum and Alyse Garcia approached the Board to submit a student request that a local GSA group be recognized as a school-affliated student group.

Class of 2015 graduates Christian Loaiza and Gabrielle Huntington were present to make their case, with Loaiza giving a passionate account of his own personal journey after coming out as a gay person.

“I am grateful for the support I have received from my family, my friends and the school,” he said. “I think it is important we have a group like this at Perry, because having a group of people who understand you can be a great relief.

“Perry High School is known for our diversity and I think doing this would bump our diversity even more . . . it would be amazing,” he added.

Maylum noted the group had met unofficially every Friday after school to discuss LGBT issues and topics and that some students had attended the governor’s conference on LGBT students.

“I came from Bettendorf three years ago, and they had a similar group that was accepted and well-respected,” he said. “I think it would be to our advantage to have one here.”

Garcia said a local GSA would “provide a safe place for those students and help to create acceptance among the student body as a whole.”

The board approved the creation of the club unanimously.

“The instruments in question are beyond repair,” Weeks said. “As far as the uniforms are concerned, we have ordered new marching band uniforms and raincoats and with our pep and concert band uniforms it would mean storing five different kinds and we simply don’t have the physical space.”

Weeks said several possible ideas were in the works, including trying to sell the lot wholesale to another school and/or selling some to alumni, with any money generated being donated back to the general fund.

Marburger also sought clearance for the disposal of a butterfly machine and broken leg extension machine from the PHS weight room, as well as a non-functioning printer.

Approval was given for all items in question to be disposed.

Maylum had started the meeting by updating board members on the burgeoning success of “The Grow” a greenhouse/gardening project in which students with disabilities and others who might be interested learn communication skills as they plant, care for and sell produce. The produce is grown in a plot just east of the high school, and area Maylum said he would like to see expanded as the popularity of “The Grow” has sprouted.

“At some time in the future maybe we could work this into a class offering,” he said. “This year we had Iowa State fraternity and sorority students spending two or three hours a week coming here to work with the kids as part of their own volunteering requirements.

“Since we started two years ago our spot as became a destination of sorts for many of the students,” Maylum continued. “I am also finding some students wanting to come in on their own or over the summer on their own time. Last year what we did not sell at the local farmer’s market we donated to the mobile food pantry and that amounted to more than 600 pounds of produce.”

Superintendent Lynn Ubben reviewed the 2015 Iowa legislative session as it pertained to local funding, noting the Iowa House and Senate had approved a 1.25 percent increase and a $55.7 million one-time allocation, which would generate increased spending per pupil of $111.52. Neither, she said, had as yet met final approval from Governor Branstad.

In other action, the board approved an agreement with 21st Century Rehab, P.C. for sports medicine services for the upcoming school year, gave consent to revisions of some board policies and agreed to the support staff salary roster.

Also approved was the PCSD Special Education Service Delivery Plan, the district’s intent to take part in the SAI Mentoring and Induction Program and several resignations, transfers and hires.