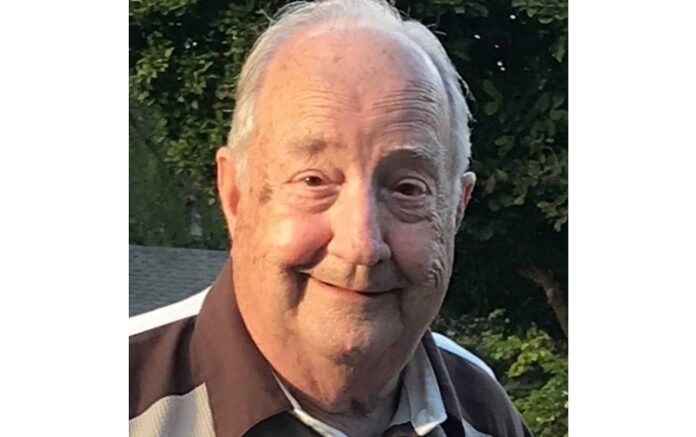 Funeral services will be held Thursday, Jan. 20 at 11 a.m. at the First United Methodist Church in Perry. Visitation will be Wednesday, Jan. 19 from 1:30 to 6 p.m., with family present from 3-6 p.m. at the Carris Family Funeral Home and Cremation Care in Perry. Burial will be in the West Holman Township Cemetery at Sibley, Iowa, Friday, Jan. 21 at 1 p.m. Everyone is encouraged to wear face coverings and practice social distancing while attending visitation and services.

During his formative years, he went to Sibley school system and graduated in 1950. He also participated in school plays, band, choir, glee club as well as football, basketball and track. He received scholarships for athletics and music to Northwestern Junior College in Orange City, Iowa.

After graduation from NJC, he married his high school sweetheart, Amelia Ann Jeffries, in Sioux City, Iowa, during the polio epidemic of 1952. He and his bride then moved to Holland, Michigan, where he attended Hope College for one year.

During that summer, Harlan was called into service for his country with the U.S. Army. He served the majority of that time as a radio operator in the country of Panama.

Following his honorable discharge, with the help of the GI bill he was able to finish his college education and obtained his BS degree in Chemistry from Morningside College in Sioux City. He then obtained his MS degree at the University of Nebraska in Lincoln in physiology. While there he was involved in a research project on the development of heart transplants.

During his time at the University of Iowa, he was offered a position as lead scientist with the American Type Culture Collection in Washington, DC. They did not have appropriate laboratories, so he was assigned to be a guest scientist at the Tissue Culture Section of the National Cancer Institute in Bethesda, Maryland. While there he was the author and co-author of several scientific papers and also gave oral presentations.

Harlan accepted a position as director of quality control at the Grand Island Biological Company (GIBCO) in Grand Island, N.Y. Other positions held at GIBCO/a division of the Dexter Corp. were vice president of customer service and later vice president of operations. At that time he not only was in charge of the GIBCO operations but also oversaw the operations of the St. Louis Serum Operation in St. Louis as well as their operations in Mexico City. Additionally, he oversaw the small animal facility and the microbiological operation in Madison, Wisconsin.

He was also on the GIBCO/Biocult Board of Directors for their European Operation in Glasgow, Scotland, and their European Distribution Center in Amsterdam, the Netherlands. He traveled extensively in these positions to many countries, including Scotland, England, Netherlands, Denmark, Germany, France, Spain, Italy, Mexico and Japan.

Harlan was eventually named vice president, chief operation officer and site manager for the Grand Island Operations, which included another division, the Invenex Pharmaceutical Co. During this time, he was a member of the American Cell Biology Association, the Tissue Culture, Cryobiology Society, the American Red Cross, the Grand Island Rotary Club, the Grand Island Neighbors Foundation and others.

Following all this, he retired and set up a consulting company, Innovation Concepts. He was successful in assisting several companies, including the Centennial Corp. and Nova Tech among others. He then officially retired to Las Vegas and later to Laughlin, Nevada.

Harlan was very active in the United Methodist Church in Bullhead City, Arizona, where he was finance chairman. He is a member of the VFW, American Legion, AMAC and NRA. He received the Citizen of the Year Award in 1980 in Grand Island. He was a fraternity member of Phi Tau Nu while at Hope College.

While living in Laughlin, his wife, Amelia, of nearly 49 years passed away. He then had the joy and responsibility of raising his granddaughter, Tamara, who was 12 years old at that time. After she graduated from high school and was attending college at Arizona State University, Harlan relocated to Rippey, Iowa, in order to spend more time with his daughter, Cindy, and his other granddaughters, Danielle and Courtney.

He intended to remain in Iowa for only a short time, but he met, fell in love with and married Margaret Houseman in Perry in 2012. During his time in Iowa, he became active with the Rippey Lions Club, where he was president. He also joined the United Methodist Church, serving on the SPRC and finance committees.

He enjoyed spending time with his family, traveling, watching sports on television and researching items on his computer.

Memorials will be given to the family for later designation and may be left at the funeral home. Online condolences may be left at www.carrisfuneralhome.com.