Perry native Scott Heldt, in the running for a seat in the Iowa House of Representatives for District 20, which includes Perry, held a meet-and-greet event Tuesday evening at the Casa de Oro in Perry. 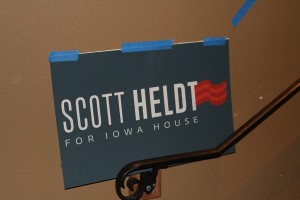 Heldt is a Democrat running against four-term Republican incumbent Clel Baudler of Greenfield. The Perry High School graduate earned a bachelor’s degree in public policy and ethics at the University of Iowa, picking up a certificate in business entrepreneurship on the side.

Education is one of Heldt’s passions, and he lamented the re-emergence in the new legislative session of the Iowa General Assembly’s chronic partisan wrangling over public school funding.

“I’m proud of the education I received from Perry Community Schools,” Heldt said, “and depriving our youth of the same opportunity to succeed and compete in an ever-growing international job market is detrimental to our communities and state. Continuing to create pathways for success is essential for our children to choose their own future.”

The Medicaid switch represents the largest government privatization effort in Iowa government history, and it has doubters on both sides of the aisle.

Environmental issues are also high on Heldt’s priority list. As with the governor’s Medicaid gambit, his recent proposal for funding water-quality initiatives with part of the sales tax funds originally meant to support public school infrastructure has met resistance from Republicans and Democrats alike.

Heldt was joined Tuesday by diners from the Casa de Oro as well as several family members. His cousin J. P. Hulgan of Perry stopped in to say hello and wish Heldt well on the campsign trail.

“I absolutely love that he is going after his goals,” said Hulgan, a who himself is nonpartisan. “Political party affiliation aside, he is representing Perry well.”