Described by promoters as an “interactive bacon-infused happening,” the festival dates to 2007. An ’80s theme was chosen for this year’s event and the slogan “Body by Bacon — Sweatin’ to the Sizzle.”

“As in year’s past, the bluegrass sounds of Mr. Baber’s Neighbors will kick off the festivities, providing everyone with a comfortable and familiar atmosphere to begin their bacon journey,” said Marshall Porter, corporate communications agent for the event. “Later attendees will find themselves slowly transported into the 80’s when Kentucky Fried Mullet takes the stage. Next, it’s time to go crazy with Grammy Award-winning Matt Fink (AKA Doctor Fink) and his five-piece Prince tribute band, The Purple Xperience. The ‘80’s experience will culminate with the all-female rock group Hell’s Belles – the only AC/DC tribute band endorsed by Angus Young himself.” 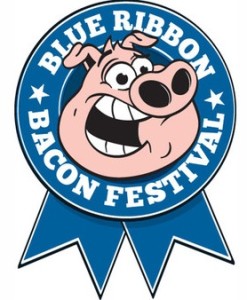 Along with the comforting and familiar sounds of ’80s tribute bands, the idea of physical fitness added a new wrinkle to this year’s event, a counterpoint to the excesses encouraged in the bacon-eating contest.

“After loading up on energy-packed bacon, take an opportunity to burn it off at the Body by Bacon Gym,” Porter said. “From Zumba and Hula Hooping to Bacon Robics and Twerking, there will be a variety of fun-filled exercise routines for bacon-lovers of all fitness levels.”

Other contests included the Footloose Dance Competition presented by Oscar Mayer, hosted and judged by Chris Soules of Dancing with the Stars and The Bachelor. Winners were awarded a trophy, a one-year supply of bacon and $500.