Preparing just in case schools in Iowa reopen May 1, both the IGHSAU and IHSAA have released tentative scheduling guidelines for an abbreviated spring sports schedule. All is, of course, dependent on a return to normal school activities May 1. If school is not in session, no sports of any kind will be held, and the upcoming baseball and softball seasons will be in serious jeopardy.

Activities Directors in the Raccoon River Conference are scheduled to hold an online meeting Wednesday. Expected to be discussed are how to proceed with their respective seasons. Chief among questions to be settled will be whether to begin play May 4 with schedules as they currently exist, or to scrap those slates and cobble together a shortened season focusing on conference play.

The Des Moines public schools have said they may elect to cancel the remainder of their school year, regardless of whether Iowa Governor Kim Reynolds makes a decision to return to classes May 1 or not. The loss of varsity action from East, Hoover, Lincoln, North, and Roosevelt would have a considerable impact on large school sports and might have a trickle down effect. 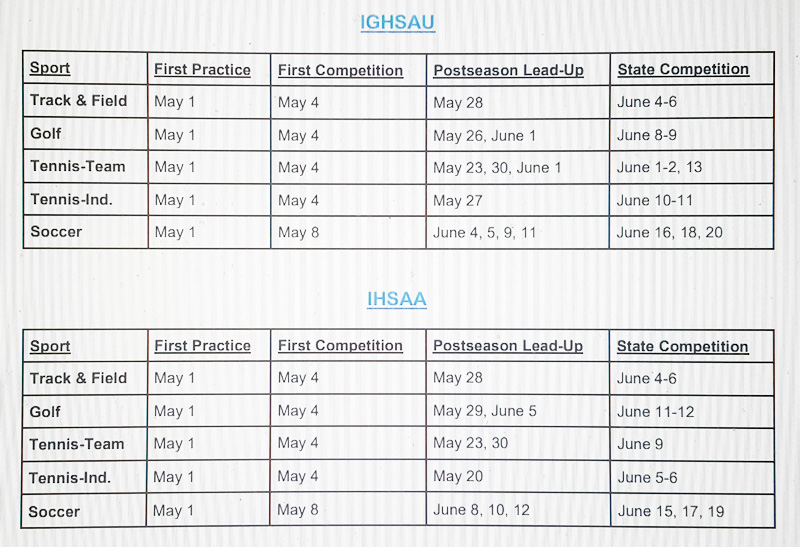 Postseason host sites and state championship event venues are currently set as previously announced. Any changes or updates will be announced as they become available.

The IGHSAU and IHSAA have not set a maximum or minimum number for competition dates within this adjusted schedule. Previously stated competition limits apply for each sport. Member schools may determine their own regular seasons which are best suited to their school schedules and activities.

Golf postseason dates may vary due to course availability.

Nielsen was the man in charge at Class 2A state championship

Crawford will play on the pitch for Wayne State College