Iowa Gov. Terry E. Branstad recently joined his fellow governors and several mayors in proclaiming of the Spirit of ’45 Commemoration Week. In Iowa the Spirit of ’45 ceremony will be conducted at the Iowa Veterans Cemetery Sunday, Aug. 16 at 1 p.m. Gov. Branstad will speak, along with Capt. Jerry Yellin of Fairfield, a World War II fighter pilot.

“This will be a special ceremony for our World War II veterans and our state,” Col. King said. “Our ceremony is one of many that will be conducted around the world that day to recognize and honor our World War II veterans for their service to our nation. This is an international event being conducted at the cemeteries that are the final resting place of our veterans.”

Ceremonies are also planned at Arlington National Cemetery, all national cemeteries operated by the U.S. Departments of Veterans Affairs and the Park Service, all American Battlefield Monument Commission sites and many state cemeteries around the world.

The annual Iowa State Fair Veterans Day parade will take place the next day, Monday, Aug. 17 at 11 a.m. Branstad, as Commander-in-Chief of the Iowa National Guard, will officiate the parade, and he will be joined by other dignitaries on the reviewing stand in front of the fair’s administration building.

The grand marshals of this year’s parade will be World War II veterans. Col. King explained the significance of the state fair parade.

“The Iowa State Fair Veterans Day parade is a long-standing fair tradition,” he said. “The parade route is lined several deep as the parade makes its way down the Grand Concourse and its route around the fairground. The on-lookers are as varied as the parade entries. Veterans, veterans service and support groups, friends of veterans and good patriotic Americans. Many are Iowans. Many come from across the country and around the world.”

The Iowa ceremonies will roughly coincide with a nationwide celebration of the 70th anniversary of World War II. A U.S. Spirit of ’45 Commemorative Weekend will begin with a mass “Kiss in” in Times Square on Friday, Aug. 14, followed by flyovers by World War II aircraft, swing dances and concerts, rallies of Rosie the Riveter lookalikes and open houses at senior residential communities throughout the country.

The event are free and open to the public. 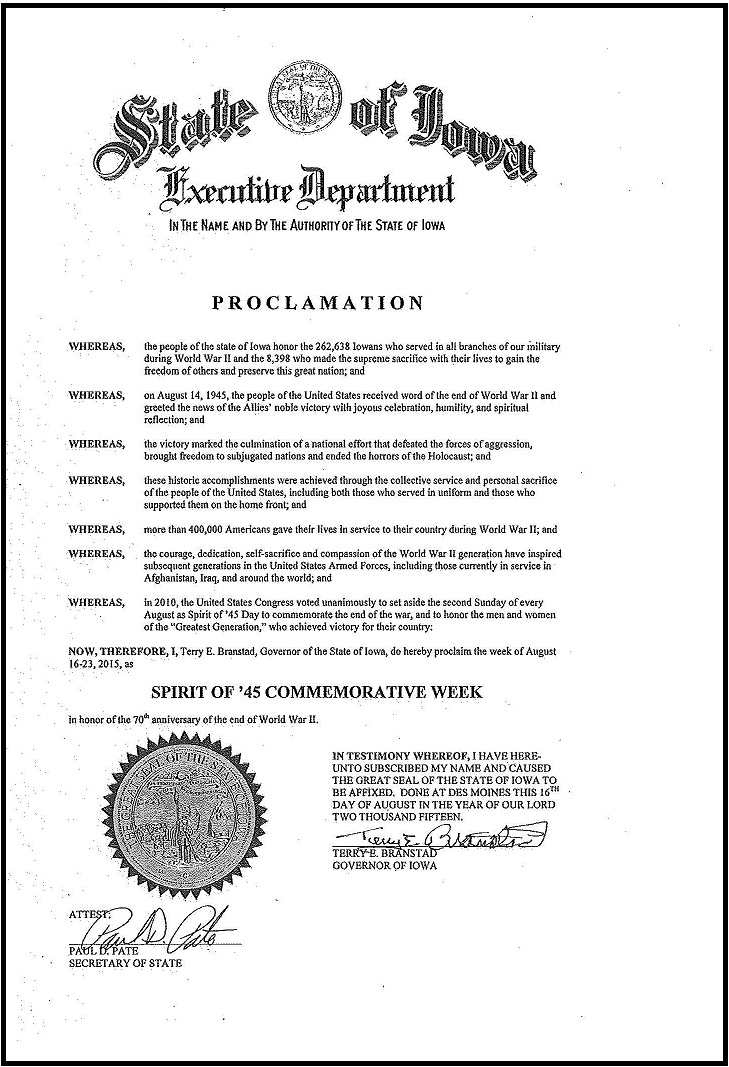