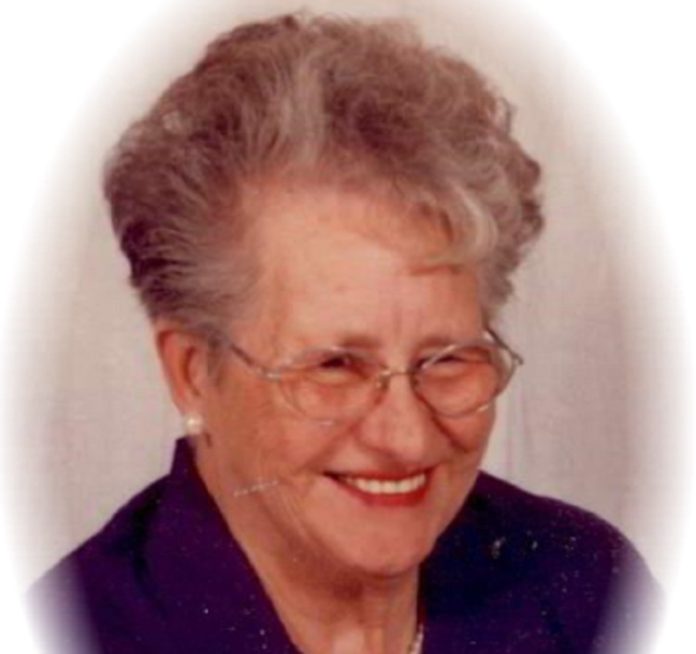 Funeral services for Ivalee Helen “Ivy” Arrowsmith were held at 5 p.m. Wednesday, Dec. 28 at Hastings Funeral Home in Perry. Visitation was after 1 p.m., with family present from 3 p.m. until the time of service.

Recorded music selected was “I’ll Fly Away,” “It Is Well with My Soul,” “The Old Rugged Cross” and “How Great Thou Art.” Interment will take place at the Valley View Cemetery in Perry.

Ivy was raised in Albert City and graduated from Silver Lake Consolidated High School in 1949.

After high school, she married Harvey Earl Arrowsmith on May 27, 1949 at Our Saviors Lutheran Church. Together they made their home in Dawson and raised two daughters, Julia and Bonnie.

Ivy gardened and canned and helped Harvey whenever she could.

Ivy moved to Perry after Harvey’s death in 1996.

She was a homemaker and enjoyed various part-time work as a seamstress for family and others. Her front porch was full of sewing fabric, and she was known to craft wedding dresses, afghans and quilts. She enjoyed crocheting, knitting and tatting as well.

You could find her listening to the radio, watching television, especially if the “Golden Girls” were on, or doing a word search.

Ivalee was preceded in death by her parents; husband, Harvey, on Nov. 12, 1996; her sister, Verva Carlson; and brother-in-law, Roy Carlson.

Ivalee is survived by her daughters, Julia Arrowsmith of Yale and LaVonne “Bonnie” (Bob) Thompson of Perry; granddaughters, Theresa (Kendall) Wilson-Salts of Perry and Christine McCollum of Fort Dodge; and five great-grandchildren, Andrew Wilson and Cheyenne Salts, both of Perry, and Alexander McCollum, Chase Evans and Zachary Evans, all of Fort Dodge; and other relatives and friends.