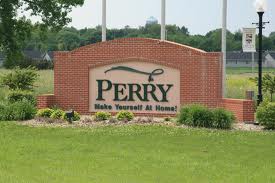 Amy Marckres hit her first 3-pointer of the season with 33.1 seconds to play to tie the score at 62-all and cap a 5-0 Perry run. Boone ran the clock down to 7.9 seconds before calling a timeout.

The Toreadors had the ball on the side line in front of their own bench, with Caitlynne Shadle hitting a cutting Sandvig with an accurate inbound pass, which the 6-0 senior immediately put into the basket.

Perry called their final timeout with 3.9 seconds left and were faced with having to take the ball all the way up the court, with Maggie Lowe’s desperation shot at the horn from just past mid-court off the mark.

Boone won their sixth consecutive game by surviving a brilliant first half from Lowe, who sank four treys while pouring in 22 points in 16 minutes.

Perry — which has lost three of their last four — held a 39-32 lead at the intermission but went cold in the third period as Boone slowed the pace while outscoring the guests, 15-8, to tie the game at 47-all with eight minutes to play.

Sandvig had 22 for Boone, which snapped a nine-game losing skid to Perry. Claire Sandvig added 13 points and Carrie Overland eight to pace the hosts.